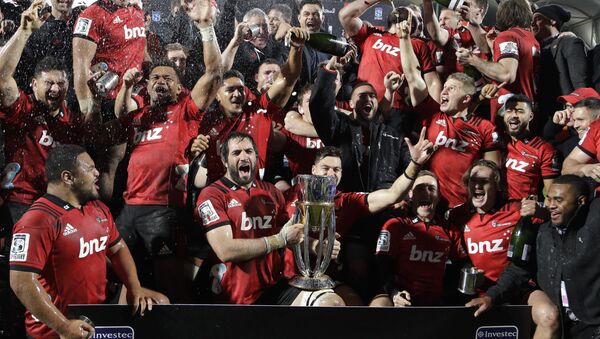 © AP Photo / Mark Baker
Subscribe
The debates around the Christchurch rugby team’s name and emblem, which hark back to the medieval wars for the Holy Land against Muslims, flared up after a shooting rampage in two local mosques that claimed the lives of at least 50 people.

The non-international professional rugby union team “Crusaders”, based in Christchurch, has responded to concerns raised over its name and symbols following the mosque massacre in their hometown in New Zealand. They said that they should have a conversation about their brand, which refers to ancient wars where Christian armies sought to reclaim the Holy Land from Muslim rule, and promised to take on board all of the feedback. However, they noted that “the time for that is not right now” when “emotions are very raw”.

“There is the need for this community to wrap our support around those who are most affected by Friday’s events, and that is the immediate focus for the Crusaders team. At an appropriate time, we will thoroughly consider the issues that have been raised and our response to that. That will include conversations with a range of people, including our Muslim community”, the team’s statement reads.

Although, they expressed their understanding for concerns over their name, the “Crusaders” noted that it is “a reflection of the crusading spirit of this community” for them.

“What we stand for is the opposite of what happened in Christchurch on Friday; our crusade is one for peace, unity, inclusiveness and community spirit”, they said, adding that they are united with the community "in standing in support of our Muslim brothers and sisters".

​The club, whose emblem is a knight wearing a cross on his chest and swaying a sword above his head, is one of the most decorated teams in the country, as it has won nine champion titles of the prestigious competition Super Rugby, featuring players from Argentina, Australia, New Zealand, South Africa, and Japan. Discussions on the matter have included high-profile speakers such as New Zealand's Sports Minister Grant Robertson, who said that such conversations were appropriate.

"I'm aware of the conversations that they're now having with, in particular, the Muslim community in Christchurch. The Crusaders is a well-established name and brand, but I think it is a responsible action to undertake those conversations now", he said, as cited by Al-Jazeera.

While the minister remained tight-lipped about his personal opinion, netizens were more outspoken on the matter. Many insisted that the name and branding should become history.

The weakness of your words is betrayed by the accompanying twitter image of a cross-wearing medieval knight with sword raised. These knights slaughtered Muslim men, women and children. You must know that. I’ve supported Canterbury Rugby for 40 years, please change the name.

​Others were less severe on the matter, speaking about the anger possibly being misdirected.

I find it incredible that in a time like this what some people care about most is the name of a rugby team. The name and what the name represents has been open to everyone since it’s inception. Why has this conversation only just been raised since the recent tragedy?

​Others insisted that they should stick to the old name.

Please don’t change it, it is insanity. We know the true meaning of a crusader. Also this will give a small win to that loser shooter

People need to calm down and focus on love and kindness. To me the crusaders are just a rugby team.

​The team thanked everyone who gave their say, noting that all the comments would be considered as they undertake “a thorough process”.

We are committed to undertaking a thorough process on this, but it should not be this community’s primary focus right now. There are more important things. Keep looking after each other, our hearts are with you ❤️