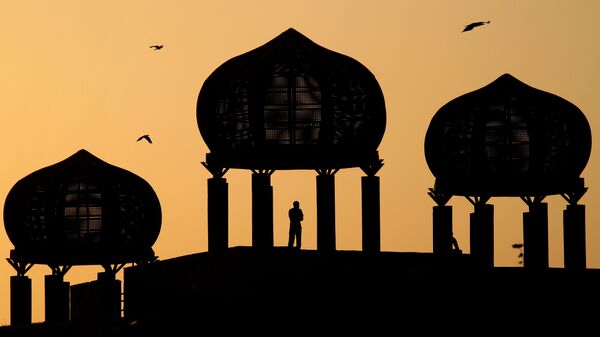 China and Pakistan have held their first ever Foreign Minister-level strategic dialogue less than a week after Beijing blocked a UNSC proposal to list Jaish-e-Mohammed Chief Masood Azhar as a global terrorist. Earlier, in the midst of aerial exchanges between the Indian and Pakistani air forces, China had indicated it would not take sides.

New Delhi (Sputnik): Against the backdrop of simmering Indo-Pakistan tensions, China has given a strong signal to the international community vowing to support Pakistan in its effort to protest its sovereignty and territorial integrity under any circumstances. Following the first-ever China-Pakistan Foreign Minister-level strategic dialogue, Chinese Foreign Minister Wang Yi said, "No matter how things change in the world and in the region, China will firmly support Pakistan in upholding its sovereign independence and territorial integrity and dignity".

For his part, the Pakistani FM said that the two countries had reaffirmed their time-tested and all-weather strategic cooperative partnership and agreed to maintain regular two-way high-level political and official exchanges.

"They underlined that state sovereignty and territorial integrity are cardinal principles of UN Charter and international law", a statement issued by Pakistan's foreign ministry reads.

Pakistan Exults as First Thermal Plant Under CPEC Starts Electricity Generation
The statement is a clear departure from Beijing's earlier stance when on 27 February, in the wake of aerial exchanges between the air forces of India and Pakistan, the Chinese foreign office  indicated that it would not take the side of any country as it observed "India and Pakistan are both important countries in South Asia".

"India and Pakistan are both important countries in South Asia. We hope the two sides will bear in mind the peace and stability in the region, exercise restraint, step up dialogue and properly resolve relevant issue, so as to safeguard the fundamental interests of their countries, maintain peace and stability in the region and refrain from actions that might lead to further escalation of tensions", Lu Kang, Foreign Ministry Spokesperson said on 27 February.

The hostilities between India and Pakistan have been simmering since they escalated on 26 February when the Indian Air Force trespassed on Pakistani territory to launch an aerial attack on an alleged terrorist camp in Balakot. The Pakistani Air Force reciprocated by entering Indian airspace and bringing down a fighter plane. On 14 February a terror attack claimed by a Pakistani-based jihadi outfit Jaish-e-Mohammed targeted Indian paramilitary forces  in Pulwama.