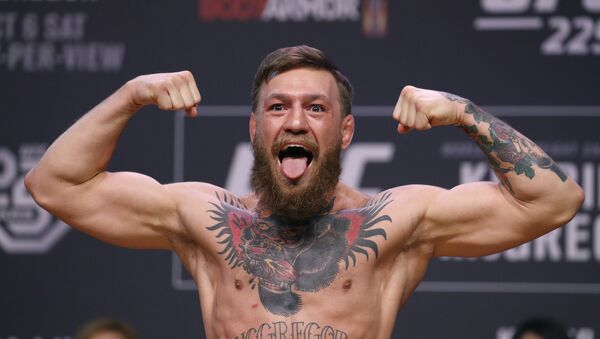 “The Notorious”, who has gone down in history as the first man to hold two UFC titles simultaneously, is also a football fan who, it turns out, has his idols on the pitch. A Portuguese superstar, who now plays for Juventus in Italy, is one of them.

Millionaire fighter Conor McGregor has called Cristiano Ronaldo, who recently scored a hat-trick in Juventus’ game against Atletico Madrid that sent the Italian club to the Champions League quarter-finals, a “phenomenal athlete, person, and entrepreneur” in a recent interview with FIFA.com. The MMA superstar did not mince his words of admiration for the Portuguese top footballer.

“His all-around discipline, perfectionist attitude, and dedication to his craft is inspiring and has inspired so many young children to play football. Just look what he did recently in the Champions League, at 34 years young, a hat-trick under the lights when the pressure was on for all the marbles. And against Atletico Madrid, one of the best defensive sides in Europe. That is inspiring!” McGregor said.

“The Notorious” would not have been himself without a little bit of self-promotion, noting that he and Ronaldo “are both disciplined athletes at the top of our game”.

However, while many users on Twitter shared his praise, some netizens rushed to cast a shadow on this “bond”.

And both had serious allegations of a sexual assault levelled at them.Perfect match.

​Both are frustrated souls

Ronaldo can't say same about him

“I respect Zlatan and his positive-winning-mentality mindset, but let’s get this straight: there is only one Conor McGregor! Zlatan Ibrahimovic is trying to be the Conor McGregor of football – good luck to him”, said, however, welcoming Ibrahimovic and Paul Pogba to train with him.

McGregor praised Pogba and Marcus Rashford’s performance for Manchester United, which happened to be his favourite club when he was a boy. He also admitted that he “was big into football” playing striker or midfielder when he was a child

“If you were to sum me up as a player, I was efficient, devastating and slick – similar to my fighting style. Skills learned at this youthful age playing football – teamwork, leadership, commitment, dedication and discipline – without a doubt transferred over into my combat sports vocation”, he said.