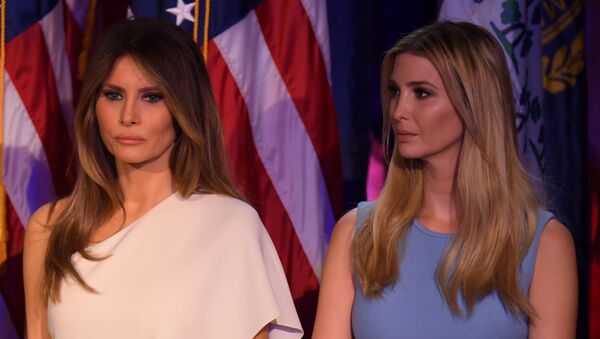 In her new tell-all book, “Kushner, Inc. Greed. Ambition. Corruption. The Extraordinary Story of Jared Kushner and Ivanka Trump”, Vanity Fair journalist Vicky Ward looks into the personal and business lives of “Javanka” – the US first daughter and her husband, a senior advisor to President Donald Trump.

Speaking on the ABC News podcast “The Investigation”, Vicky Ward, the author of “Kushner, Inc.”, said she didn’t know whether any of the conduct described in the explosive book will result in legal problems for Ivanka Trump and Jared Kushner.

“I am not a prosecutor. I’m a journalist. I think that there are many threads that 'Kushner, Inc.' throws up and it's then up to the prosecutors to see whether it’s worth pulling on those threads”.

Ward said that her work covered some of the issues that were laid out in letters that House Judiciary Chairman Jerrold Nadler sent to 81 people and entities as part of a sweeping investigation into President Donald Trump’s campaign, business, and administration.

The long-time Vanity Fair journalist then claimed that from the very onset, she was warned the Trump administration would try to sabotage her image and undermine her credibility.

“I was warned back in the summer before I’d actually written a single word. Someone very close to the Kushners said they’re going to go and try and discredit you. I mean, I knew right from the outset that’s what their plan was”.

Speaking on The Late Show with Stephen Colbert, Ward said that President Trump was “very ambivalent” about having Ivanka and his son-in-law working in the White House, since he “hates it when they get negative press”.

She then elaborated by saying that ex-Chief of Staff John Kelly tried to make them resign on Trump’s orders, and when they came to do it, POTUS couldn’t simply “send his daughter home”.

“He cannot send his daughter home.”@VickyPJWard says Jared Kushner and Ivanka Trump wanted to resign, but President Trump couldn’t do it. #LSSC pic.twitter.com/RHmPScc4WS

The author then voiced an opinion that Ivanka and Jared may be even more dangerous to the president than Special Counsel Robert Mueller, who’s leading the probe into the Trump campaign’s alleged collusion with Russia.

After two years of intense reporting, I have come to the conclusion that Jared Kushner and Ivanka Trump pose an extraordinary—and extraordinarily under-recognized—threat to the systems and protocols that have kept this great country safe and free.

My goal with #KushnerInc was to expose the systemic damage Jared Kushner and Ivanka Trump have caused to our country, and, even more importantly, the why. The public has a right to know.

At the same time, she revealed that there is only one person in the White House that has so far managed to stand up to Trump’s beloved daughter and it’s none other than FLOTUS Melania.

“So here’s an interesting suggestion: Melania Trump… is the only person in my book who has ever successfully stood up to Ivanka Trump and won. I have a scene [during the transition in which] Ivanka Trump has told the world that she’s not going to be joining the White House. Absolute rubbish. Behind the scenes [she was] making all the plans. [She actually had] a 'Trump family office' drawn up for the East Wing, which is normally the territory of the First Lady. When Melania Trump heard about this, she put a very quick end to Ivanka’s plans”, Ward said.

Ward has interviewed 220 people for the book, although she’s been quite vague as to who her sources were, indicating them as “close associates” and “family friends”.

I spent two years researching #KushnerInc. I interviewed 220 individual people, interviewing 118 of those people multiple times. There are anonymous sources, but everything is at least double-sourced. Nothing is based on just a single person’s recollection of events.

The book has caused quite a stir on social media, leading to an avalanche of various reactions:

Just read it over the weekend. It’s a terrific read but maddening. Be prepared to put in down every page or so, shake your head, and say “WTF!?!🤯🤯🤯”

This is the book I’ve been waiting for. Available in a few minutes. I think the Trumps / Kushners are going to have a very bad day today. #VickyWard #KushnerInc #IvankaKushner #JaredKushner pic.twitter.com/nc5t8wwL6Y

WHAT IS A MUST READ IS THE NEW BOOK, KUSHNER INC. CROOKED DUO!

“It’s sad, but not surprising, the media would spend time promoting a book based on shady anonymous sources and false information instead of all the incredible work Jared and Ivanka are doing for the country”, she said.

In a statement to ABC News last week, Kushner’s representatives also slammed the book as “fiction rather than any serious attempt to get the facts”.