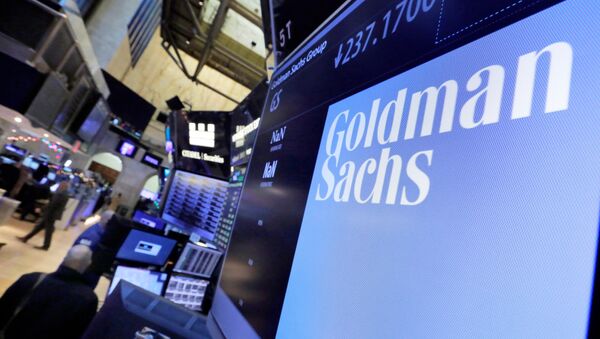 Malaysian prosecutors have demanded that top officials with two units of US investment bank Goldman Sachs appear in court in connection with a multibillion money-laundering scheme involving the nation's former prime minister and investment fund 1MDB.

Kristian Rouz — Prosecutors in Malaysia are set to summon top bankers from Goldman Sachs branches in London and Hong Kong in their ongoing probe into the money laundering scheme involving former Prime Minister Najib Razak and investment fund 1MDB. This comes ahead of a court hearing, set to take place in Malaysia on 24 June.

Goldman Sachs Exec Dina Powell Out of Running for UN Job - Reports
According to a statement from the Malaysian government, two units of US investment bank Goldman Sachs will have to formally respond to the criminal charges against them, filed by Kuala Lumpur last year.

The summons are related to the laundering of billions of dollars through the 1Malaysia Development Berhad fund (1MDB), that involved Najib and his inner circle during his tenure as Malaysia's PM between 2009 and 2018, and the laundering of Malaysian development funds for the purpose of buying luxury real estate and other assets in the US and the UK.

Prosecutors say the case could set a precedent for other countries suffering from money-laundering on an international scale for the decades to come.

"Fresh summonses will be served on the United Kingdom and Hong Kong offices of Goldman Sachs ahead of the next court hearing on June 24", Malaysian prosecutor Aaron Paul Chelliah said.

The latest developments in the 1MDB scandal involve a discovery by the new Malaysian government of at least $6.5 billion in bonds, issued by the fund in violation of market rules. The prosecutors alleged Goldman's branches in London and Hong Kong helped Najib and his affiliates mislead investors by making false statements about the purposes of the bonds emission, as well as omitting key facts from their official filings.

For their part, US officials have ramped up an investigation into the scheme on their end, with the Federal Reserve blacklisting several Goldman bankers with alleged ties to the scheme.

The Fed barred Tim Leissner and Roger Ng from the financial industry for participating in "a scheme that illegally diverts billions of dollars from a Malaysian sovereign wealth fund", according to a statement by the US central bank.

The Fed's action comes after the US Justice Department launched a probe into 1MDB following a similar move by the new Malaysian government.

"Given the Department of Justice's charges, this development is hardly surprising", Michael Duvally of Goldman Sachs said.

Leissner has agreed to pay a $1.42 million fine as part of a settlement with the Fed. He has previously admitted to conspiracy to launder Malaysian money in the West in violation of the US Foreign Corrupt Practices Act.

Why Soros, Goldman Sachs, Wall Street Tycoons Embrace Bitcoin
For his part, Ng is currently in detention in Kuala Lumpur, pending extradition to the US. However, Malaysian prosecutors say they will seek to complete their case against him first.

This past January, Goldman Sachs apologised to the people of Malaysia for helping harbour misappropriated funds outside of the country. The bank, however, maintained it had conducted all the necessary checks but processed the transactions — a statement, which, if used by Malaysian prosecutors, could implicate officials with the former Malaysian government.

However, Malaysian investigators could take a hardline stance on Goldman, seeking a crackdown on the bank's foreign investment practices.

The DOJ said at least $4.5 billion had been moved from Malaysia into foreign jurisdictions through 1MDB between 2009 and 2014. But the new Malaysian government is seeking $7.5 billion in compensations from Goldman. It is unclear whether Kuala Lumpur will seek reparations from the US government.