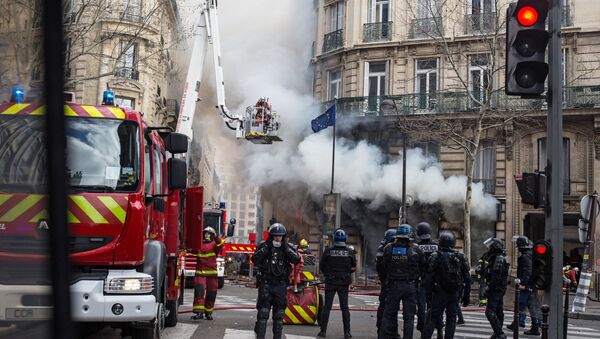 The latest measures by the French government to squash Yellow Vests protests won't work in its favor, and may likely only help promote the grassroots movement's fight to change the country's economic policies, Gilbert Mercier, editor in chief of the News Junkie Post, told Sputnik.

"No, no, it's not going to stop the movement," Mercier told Radio Sputnik's Loud & Clear on Monday. "As a matter of fact, it's probably going to help the movement."

​In a televised speech on Monday, French Prime Minister Edouard Philippe said that new security measures would be going into effect following the violence that occurred over the weekend during the 18th week of mass demonstrations in the country.

"From next Saturday, we will ban ‘Yellow Vest' protests in neighborhoods that have been the worst hit as soon as we see sign of the presence of radical groups and their intent to cause damage," Philippe said, stressing that some participants were engaging in "criminal acts."

Over the weekend, violent protests broke out in areas of the French capital popular with tourists, including the Champs-Élysées, where demonstrators smashed dozens of popular storefronts, among them the high-end Fouquet's restaurant.

By the French government's count, more than 10,000 Yellow Vest protesters took part in the latest demonstration. According to the New York Times, 237 demonstrators were arrested and another 144 were taken into police custody. French police will be using drones among other surveillance methods to identify and arrest rioters moving forward.

Mercier, who is the author of "The Orwellian Empire," told hosts Brian Becker and John Kiriakou that "what was unique about last Saturday's [demonstration] was the fact that it was a black bloc and [Yellow Vests] action." Black bloc is a tactic protesters use to avoid being identified by wearing all-black clothing and face-concealing items.

When asked by Becker of the possible downfalls of the long-running demonstrations, such as police infiltration, Mercier admitted that there had been some setbacks, but that at the end of the day French politicians are failing to grasp the movement's demands.

Following a trip to East Africa last week, Macron took a trip to the Pyrénées for a quick ski break over the weekend, a move which irked many.

"[French President Emmanuel] Macron was busy after a nice little tour of Africa, where he was probably selling weapons mainly," Mercier told Becker. "Macron is not getting the message."

"[French politicians] are not willing to compromise and to listen to what people really want," he stressed.

Macron tweeted over the weekend that the protesters "want to destroy the republic."

Yellow Vests rallies first began in November 2018, with the initial protests focusing on the government's plan to spike fuel taxes. Protests have largely continued over a wider discontent with government policies, particularly those driving economic inequality. French police are coming under increasing criticism for their violent handling of some protestors.