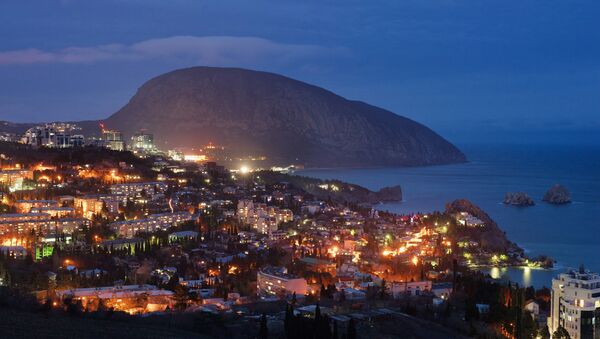 MOSCOW (Sputnik) - Crimea has been transforming fast since rejoining Russia in 2014, and life in the region is much different from what the mainstream media depict, according to European politicians who have visited the peninsula.

On 16 March 2014, people in Crimea voted in a referendum that would determine the future of the region, and sure enough, over 90 percent of voters chose to rejoin Russia.

Ukraine and a large number of Western countries have refused to recognise Crimea's new status, but Russia has repeatedly stressed that the vote was held in accordance with international standards.

EU Reaffirms Commitment to Policy of Non-Recognition of Crimean Referendum
The decision was not without its consequences, as the region quickly became the target of Western sanctions. However, this has not deterred Russia from launching numerous development projects in Crimea, nor has it stopped several European politicians, who wanted to see for themselves what life was like in Russia's Crimea, from visiting.

Frank Creyelman, an honorary member of parliament in Belgium, became a persona non grata in Ukraine when he brought Flemish politicians to the Crimea to observe the referendum and to eastern Ukraine, where two self-proclaimed republics were clashing with Kiev.

"A few years ago I went to Odessa to talk and investigate on the conditions where some Russian journalists were held in prison. The Ukrainian authorities put me back on the plane right away. This symbolises the 'openness' of the Ukrainian government. I need to say that it breaks my heart to see two European nations fighting a war which Europe can no longer afford", Creyelman told Sputnik.

Andreas Maurer, a member of Germany's Die Linke who heads the party's group in the regional parliament in Quakenbruck, said he had received a notice of protest from the Ukrainian ambassador to Germany after each of his first seven trips to Crimea.

"I have thanked the ambassador for these notes because he has helped us to reach the German federal news outlets as we published these notes in social media and gave them to the press… But the more German citizens we brought to Crimea, the harder it was for the ambassador to react to this", Maurer told Sputnik.

Maurer mentioned the pressure being put on German businesses interested in Crimea.

"There are a lot of administrative problems. German businessmen who opened a tourism company in Crimea received a letter", Maurer said.

On the other hand, Hendrik Weber, the president of the association People's Diplomacy Norway, said he had not heard anything from the Ukrainian authorities regarding his trips to Crimea. His own government, however, has asked him to not take any more trips to the peninsula.

"Fortunately, more and more politicians are realising the reality. This month we will hold a conference in Oslo, to tell the truth about the situation in the Crimea to Norwegian citizens", Weber told Sputnik.

The conference's agenda is to challenge the point of view presented by the mainstream media, Weber said.

Bridge To a New Life

Russia
French Lawmaker Praises Crimea's 'Breakthrough' Since Reunification With Russia
In May 2018, a bridge across the Kerch Strait opened to vehicle traffic, linking Crimea to Russia's Taman Peninsula. Before, the two peninsulas were only connected by a ferry service. A railroad is being built on the bridge to complement the highway.

"Most important of course is the bridge between mainland Russia and Crimea. This will bring more trade to Crimea. but for me the major thing is yet to come: tourism", Creyelman said.

Maurer similarly drew the correlation between infrastructure development and tourism.

"There are huge infrastructure projects, such as roads, which will then be a great stimulus for the development of tourism. Russia is also planning to construct a railway there and I am planning to take the first train into Crimea on December 8", Maurer told Sputnik.

The German politician remarked on the speed with which the peninsula was changing.

"In Berlin, the airport is being built for the last eight years. We are even a little jealous of Russia. I am always using this as an example in Germany — building an airport in two years in Crimea. And to build such a huge bridge in two years and seven months, I think Russia and Crimeans can be very proud in fulfilling this project so quickly which is such a huge step for industry, for jobs and the future of Crimea", Maurer said.

People have been building homes in Crimea, which Maurer pointed to as a positive sign.

"In my last trip, I was in Simferopol a lot, and I saw a lot of ordinary people building houses and dachas [country homes]. We always say in Germany that, we have a saying, that where people are building themselves houses this is positive. Nobody will start building a house somewhere where they don’t see a future. If you look at Simferopol — this is just one large construction site. I was also in Yalta where there are a lot of infrastructure projects", Maurer said.

Crimea, with its mild climate, lustrous landscapes, and rich history has long been a tourism hotspot, but a regional rather than an international one. This might be about to change, however.

Creyelman, for one, said he was planning to bring a delegation from Belgium to Yalta in April.

"Part of that delegation is a major tourist association. This tourist association is interested in conducting weekly flights from Brussels, the heart of Western Europe, to Crimea. This will change Crimea more than anything else as tourism is where Crimea is made for. Not only nature, sun, and the Black Sea but also its history and culture", the politician said.

Maurer has seen the number of German businessmen travelling to Crimea on their own increase over the last few years. Their trips had to be organised at first, but now "they already have links there, they have partners, they travel to economic forums and they sign contracts and work there".

"More and more German businessmen see the potential in tourism, potential in the health sector so they search for all opportunities to evade sanctions", Maurer said.

Viral
CNN Folds Under Pressure From Ukraine Over Report Saying Crimean City is Russian
For Gianmatteo Ferrari, a member of Italy's Lega party, Crimea has a "formidable climate", which makes it "a very important tourist market". Foreign investors could be interested in hotels, restaurants or clubs in the region, the politician suggested.

Ferrari believed that the region was "abandoned" by Ukraine but that its modernisation began when it reunified with Russia.

"I noticed this when I went in 2015 and the entire cellular network was being redone. Not to mention the bridge that connects the Crimea directly with the mainland or dozens of flights to and from Simferopol", Ferrari told Sputnik.

The first trains that will test the route from Taman to Crimea will run as early as this August. The train service is expected to officially launch at the end of the year, making an already strong connection even stronger.