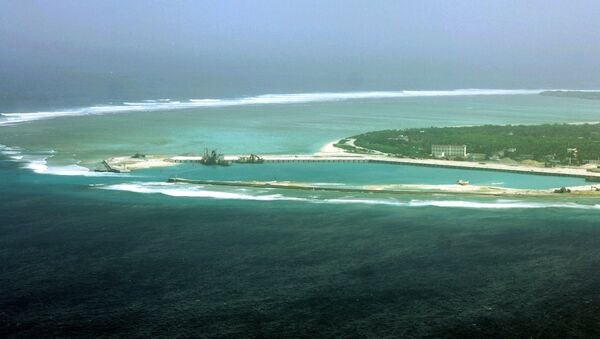 © AFP 2023 / STR
Subscribe
International
India
Africa
The Chinese government has plans for a large military settlement on a reclaimed reef in the contested Paracel Islands, where adversaries such as the US strongly oppose Chinese expansion.

The plan for an "island city" on "Woody Island" or "Yongxing" in the Paracels, 185 miles from China's Hainan Island (of which Beijing's ownership is not in dispute), was announced by a Communist Party official for Sansha prefecture on Friday. The development would turn Woody Island, along with nearby Tree Island and Drummond Island — known by the Chinese as Zhaoshu and Jinqing — into a "national key strategic service and logistics base," the South China Morning Post reported Monday.

The statement was vague, SCMP noted, only saying, "We need to carefully plan the overall development of the islands and reefs based on their different functions, taking into account their complementary relationship" and "take active steps and demonstrate their initiatives" to provide a "satisfactory report card" to the party leadership.

Only a single square mile in size, Woody Island is the administrative center of Sansha prefecture, a Chinese territory established in 2012 to govern the Paracels. A sizeable part of the island's territory is covered in an 8,850-foot long runway that can handle most People's Liberation Army aircraft, but the rest of the island already houses a sizeable settlement of 1,000 people.

Last May, the Washington, DC-based Asia Maritime Transparency Initiative noted that Chinese development of other South China Sea islands followed the "blueprint" established at Woody Island: harbor dredging followed by airfield construction; then the building of hangars, radar and communication infrastructure; and finally the deployment of anti-air and anti-ship missiles to the location.

"With similar platforms now seen on the Big Three, it is reasonable to look at other recent Woody Island deployments as signs of things to come at Fiery Cross, Mischief and Subi Reefs," AMTI said at the time.

Beijing claims ownership of 90 percent of the South China Sea, including the Paracel Islands, but those claims are disputed by a number of nations, including several other Southeast Asian nations with overlapping claims. The US and its allies, such as the UK and Japan, have engaged in defiant Freedom of Navigation Operations (FONOPS), during which military vessels ignore China's claims of sea as their territorial waters and sail on as if those claims did not exist. This has led to some tense confrontations, including one last year in which US and Chinese destroyers were only a couple of dozen yards apart, Sputnik reported.

Last week, US Secretary of State Mike Pompeo criticized "China's illegal island-building in international waterways" and accusing the country of coercing other nations, such as Vietnam and the Philippines, into giving up some of their claims over the waterway — and the substantial hydrocarbon reserves believed to lie beneath it.

However, Shi Yinhong, a professor specializing in US-China relations at Renmin University of China, told SCMP the Woody Island development was a response to US provocations, not their cause, but cautioned that exacerbating the South China Sea situation vis-a-vis Washington was not Beijing's top priority.

Chinese Foreign Minister Wang Yi said last week that plans were progressing between Beijing and the 10-country Association of Southeast Asian Nations (ASEAN) to arrive on a mutual "code of conduct" for the region by 2021, AP reported. Four of the nations involved in South China Sea territorial disputes are part of ASEAN: Vietnam, Malaysia, Brunei and the Philippines. Taiwan also lays claim to the same territory as China.

"The road map is already very clear," Wang said, noting that China's "sincerity and sense of responsibility" compelled it to develop the modus vivendi.