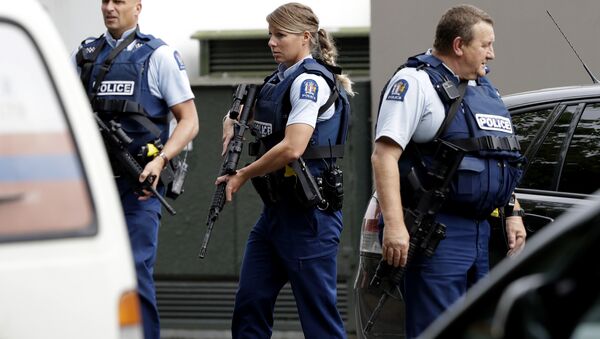 The main suspect in the mosque shootings that killed 50 people in New Zealand on Friday, 28-year-old Australian Brenton Tarrant, has appeared in court on a single murder charge. PM Jacinda Ardern said Tarrant had five guns and a firearms license, adding: "Our gun laws will change". Two other suspects are in custody.

Sputnik discussed the issue of firearms in New Zealand with Rebecca Peters, former chair of the Australian National Coalition for Gun Control at the time of the Port Arthur massacre in 1996.

Sputnik: Gun laws in New Zealand are known to be much looser than in Australia, do you think this was the reason why Brenton Tarrant chose the city of Christchurch for his attacks?

Rebecca Peters: Yes, I think this is something that we can say with pretty much for sure. The guns laws in Australia used to be like the gun laws in New Zealand but they were tightened in 1996-1997 after the tragedy that occurred here. So New Zealand's guns laws are about 20 years behind Australia.

Sputnik: In your view was the tragedy caused by easy access to guns or should we blame the spread of extremist ideology?

Rebecca Peters: Obviously the motive was the spread of extremist ideology, but it's the availability of assault weapons, weapons that are designed to kill a lot of people on a battle field in a war; it's those weapons that allow so many people to be killed or injured in such a short period of time. I would say it's definitely the availability of the weapons that made it possible for the impact to be so horrific. Whereas, if this guy had had to use some other kind of weapon to attack people, he wouldn't have been able to do as much damage as he did.

Sputnik: The country's Prime Minister Jacinda Ardern said that the attacker had five guns and a gun license, adding that the country's gun laws will change. Do you think there will be dramatic changes to New Zealand's guns laws?

Rebecca Peters: Yes, definitely, because looking back 20 years ago, when Australia changed its gun laws, that was a moment when it was suggested that New Zealand should also change its laws so that we could have uniform laws across the region, but New Zealand said no, and they said they would have an inquiry, a review of their laws instead. They had a review and that review recommended much stronger laws, including a ban on these military weapons, including the registration of all guns. Basically the review recommended that the laws in New Zealand should be more like Australia's. Those recommendations were not implemented, but I'm pretty sure that now, given the size and just the horror of this event, that for the New Zealand government, it would be easy for them to say: "here are the recommendations, we already have them, a lot of thought went into these recommendations, the easiest thing would be to just apply those recommendations and that's going to mean a dramatic improvement in the gun laws there.

Sputnik: What would you say to opponents of stricter gun laws who claim that people should have a right to defend themselves and these people will find ways to attack; I mean, they now use knives, they use trucks and cars.

Rebecca Peters: The thing is: in New Zealand, as in Australia, it's never been acceptable to really have guns for self-defense. People have guns for sport, or for hunting, or to use on a farm, or maybe they have them for work if they work as a security guard or a police officer, but the idea, like the American idea, of having a gun because you think somebody might attack you, that actually was never really accepted in New Zealand. In New Zealand law, however, it wasn't very clear, so one of the changes that we expect to see is that it should be made very clear in the law that self-defense is not a legitimate purpose.

That's why New Zealand, like Australia, has a very strong police force, it's why you depend on the institutions of the state to defend you rather than as one individual becoming a police officer. So the argument that you could kill someone with other weapons, it's true you can, but it's a lot more difficult. The research shows that… the chance of someone dying is about five times higher if you attack someone with a gun than with a knife, and the chance that you would able to damage a lot of people is much, much smaller with a knife then with a gun. Even if sometimes it's true there's a person with a truck or something, if you drove a truck towards a mosque you would not be able to kill as many people inside the mosque. A gun is just a product made specifically for killing people and that's why it needs to be very, very strictly regulated.

New Zealand PM Vows to Change Gun Legislation After Christchurch Mosque Massacre
Sputnik: Can you tell us about the Port Arthur massacre and what was the impact of the tragedy on the country's laws?

Rebecca Peters: So the Port Arthur massacre occurred in April 1996 and before it occurred, we used to have actually a mass shooting in Australia about every year, there would be six people, nine people, 12 people killed because our gun laws were not very strong. They were stronger than the American laws, but still they were not very strong and they were also different, each state had a different gun law, and although there had been recommendations to strengthen the gun laws and to make them uniform across the country, that never happened. The Port Arthur massacre was when a young man with semi-automatic rifles, similar, it appears, to the weapons this guy used in New Zealand, killed 35 people in one day. That just caused the whole country to say: "that's enough, we've lost too many people." And the prime minister, whose name was John Howard, had just been elected and he said; "I'm going to do something about this." So he called all the states together and said: "I know the gun laws are state laws but we have to make the gun laws stronger, otherwise I will push for one national law and I will make it much, much stronger than any of the states."

The states agreed to major improvement in their gun laws and that they would be uniform across the country. So that meant a ban on semi- automatics, and there was a huge buyback, about 650,000 guns were brought back and destroyed, because the guns were now banned. It also became much more difficult to qualify to own a gun, we also have registration of all types of guns and also you have to provide a reason why you want to buy a gun. So if you say you want a gun to go hunting, they need to have a hunting license, you have to prove you have permission to hunt, you have to go through some effort rather than just saying anything at all and getting a gun license. The result of that has been a dramatic reduction in gun violence in Australia, and a dramatic reduction in the amount of work that police have to do chasing gun traffickers because by strengthening the law, we actually reduce the black market in guns as well.