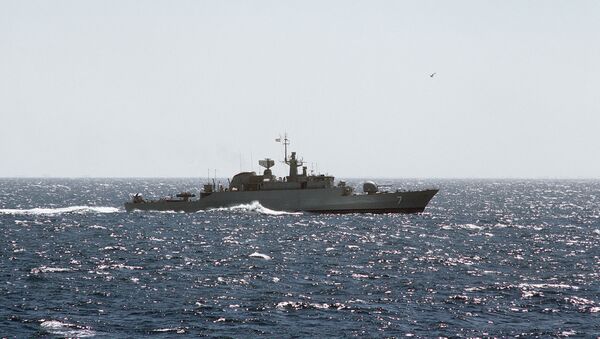 © Wikipedia / U.S. military
Subscribe
International
India
Africa
Last week, Iranian Navy ships successfully fended off an attack against an oil tanker carrying some 150,000 metric tonnes of oil after it was ambushed by nearly a dozen pirate speedboats in the Bab-el-Mandeb Strait.

The Iranian Navy has dispatched its 61st naval group, consisting of the Sabalan frigate and the Bandar Abbas logistical support ship, to the Bab-el-Mandeb Strait between Yemen and Djibouti connecting the Red Sea to the Gulf of Aden, South Fleet Commander Rear Admiral Afshin Tashak has said.

"The naval group is on a mission to provide security for the routes used by the Islamic Republic of Iran Shipping Lines (IRISL) in the area of the Gulf of Aden and the Bab-el-Mandeb Strait," Tashak said, speaking to Iranian media on Sunday.

According to the admiral, the naval group set sail for the strategic shipping strait on Saturday, departing from Iran's southern port city of Bandar Abbas.

The Sabalan frigate is equipped with a 114 mm main gun, along with anti-ship missiles, mortar, machine gun, torpedo tubes and anti-air defence weaponry. The Bandar Abbas is a lightly armed replenishment ship with a helicopter deck and hanger capable of carrying a lone light helicopter.

Since 2008, the Iranian Navy has contributed substantial resources to international anti-piracy missions off the eastern coast of Africa. According to Tashak, Iranian naval groups have escorted some 6,000 oil tankers through international waters over the past decade.

Netanyahu Threatens to Deploy Israeli Navy to Enforce US Oil Sanctions on Iran
The Bab-el-Mandeb Strait and the adjacent Gulf of Aden linking the Indian Ocean with the Suez Canal is a major global shipping route, with the equivalent of about 4.7 million barrels of oil shipped through the strait each day.

The deployment of the 61st naval group to the Bab-el-Mandeb Strait comes a week after Israeli Prime Minister Benjamin Netanyahu threatened to deploy Israeli warships to help tackle Iranian oil smuggling if Tehran attempted to skirt US sanctions. On Wednesday, Iranian Defence Minister Amir Hatami blasted Israel over the threat, saying that Tehran would "firmly respond" if Tel Aviv made any attempt to hamper Iran's oil exports, and adding that such behaviour would be considered "piracy" by the Iranian side.