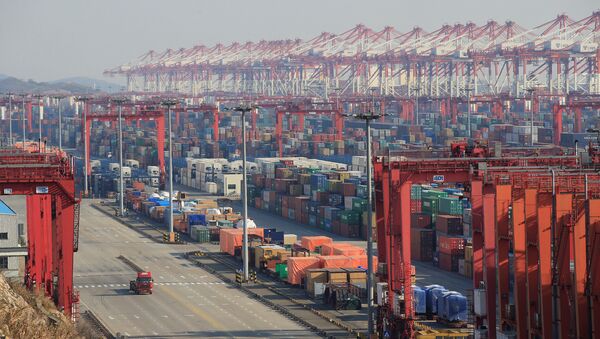 China will not restrict its trade policy towards the EU amid the trade war with the United States. This was the message that was sent to Brussels by Chinese Premier Li Keqiang during his annual press conference. The European Commission this week called on EU leaders to take a tougher stance on China.

Li Keqiang noted that the trade conflict between China and the United States is a matter of bilateral relations and that China will not harm the interests of a third party. Beijing has stressed that trade wars are not its choice for solving problems, Anatoly Bazhan, the head of the Economic Research Sector at the Institute of Europe at the Russian Academy of Sciences (RAS), told Sputnik:

"The EU does not solve its problems with China by increasing tariffs, as the US does. China, for its part, will not fight the EU. The EU and the United States also have strong disagreements, because Trump's 'new' policy oppresses European industry; China has assured that it won't do so, and this is very important. We can expect a number of mutually beneficial measures by China and the EU in this area. However, some kind of a framework agreement on industrial policy is nearly impossible now, since it is difficult to imagine that the EU would openly stand in solidarity with China in its confrontation with the United States."

Chinese Foreign Minister Wang Yi will attend the 9th China-EU High Level Strategic Dialogue in Brussels on 18 March 18. On 22-24 March, President Xi Jinping is expected to visit Italy and then France. The China-EU summit, with the participation of Premier Li Keqiang, is scheduled for April 9. It is expected that China will use these platforms to advance its negotiations on investment cooperation with the EU.

Expert Anatoly Bazhan believes that "reaching some agreement is possible, although Europe will still slow down the process because of its desire to protect its industries from the expansion of Chinese capital."

Former Trump Adviser Sees No Prospects for Long-Term US-China Trade Deal
Eastern Europe needs Chinese investments, while Western Europe already has them; therefore Chinese activity in Eastern and Central Europe will grow. Eastern and Central Europe will demonstrate their independence in attracting Chinese investment; this, however, will exacerbate their tensions with Western Europe, Anatoly Bazhan explained.

Before traveling to Brussels, Wang Yi called on the EU to establish an independent policy towards China and not succumb to external pressure. Wang Yiwei, professor and director of the Institute of International Affairs at Renmin University of China, noted that the Minister did not name the United States when he said this, but it was clear that he was talking about the US:

"German Chancellor Angela Merkel has already stressed that the fate of Europe should be in its own hands, while it is clear that Europe's security policy is not fully independent. On the other hand, the popularity of eurosceptics is growing, so whether Europe can become independent and a centre within a multipolar world will depend on Europe itself. China also calls on Europe to be independent, which is consistent with the European position."

China to Benefit From 5g Even if Huawei Pushed Away From US, EU Markets - Pundit
"Against this backdrop, the initiative of Italy to join China's Belt and Road Initiative has caused open opposition and dissatisfaction in the United States. Inside the EU itself, however, there is also friction on this issue. In addition, there is the problem of building 5G networks, where the EU does not intend to yield to US pressure. I hope that the EU will continue to pursue independent development and strengthen its independence."

This week the European Commission set out a 10-point plan for more balanced economic relations with China; the EU heads of state and government will discuss and endorse this at the European Council on 21 March. Europe hopes that the proposed measures will help strengthen their competitiveness and protect its market economy.

Experts noted that this action plan can help strengthening cooperation with China, but at the same time lead to more confrontation. In particular, the EC called for more cooperation with China in areas such as climate change, human rights, guarantees of peace, security and development. While the EC has proposed measures to identify the risks that foreign investments pose in its assets, the threats technology and crucial infrastructure pose to European security are unlikely to be met with understanding in China.