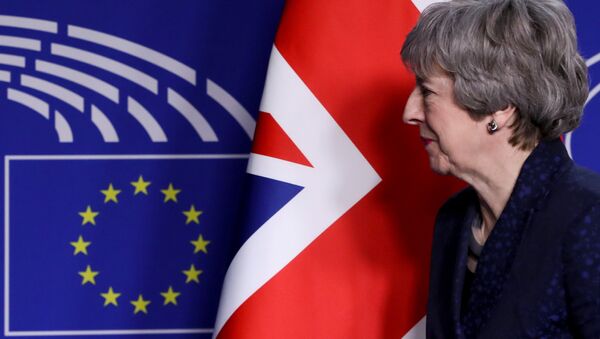 The leak comes after UK Prime Minister Theresa May held emergency talks with the Northern Ireland-based Democratic Unionist Party (DUP) in a bid to save her beleaguered Brexit deal before a third Commons vote on the package takes place next Tuesday.

According to a leaked document seen by the newspaper, EU officials are seriously concerned that May has little chance of passing the Brexit deal when she brings it back before parliament for a third time next week.

The document, which is a diplomatic notice detailing a meeting of EU ambassadors and senior officials, reveals an attempt to ensure that May’s possible successor would not be able to immediately undo the withdrawal deal clinched between Britain and the EU last year.

“Imagine that they have a new Brexit secretary or prime minister – what then? Article 50 has been agreed upon and the process has ended. It must be clear that the starting point is not a renegotiation of the withdrawal agreement,” the document quoted the European Commission’s secretary general Martin Selmayr as saying.

The leaked notes also referred to an unnamed EU diplomat who mentioned Brussels’ “clear feeling” that “there is a complete lack of confidence in the British Prime Minister to deliver on this deal”.

The developments come after May's latest version of the Brexit deal suffered a major 242 to 391 defeat in the UK House of Commons on Thursday, with a margin of 149 votes; Parliament rejected leaving the EU without a deal "under any circumstances" on Wednesday.

There is 'Good Chance' May's Brexit Deal Will Be Accepted – Henry Bolton
The MPs backed May’s government's motion to delay the Brexit deal until after 29 March in a 412 to 202 vote.

The motion sets out two options for the extension – a short delay that stipulates that a new Brexit deal will be approved by parliament by 20 March or a longer delay if no agreement is can be reached by that date.

This is the second time May's divorce agreement with the EU has been voted down by legislators.  If the deal is rejected a third time during next Tuesday’s vote, a much longer delay may come.