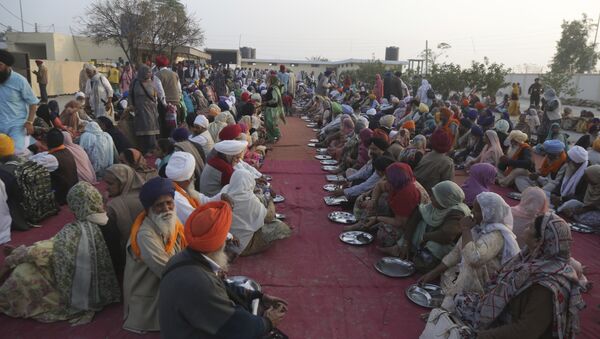 Last year, India and Pakistan embarked on the Kartarpur Corridor project which comes in the wake of demands made by the Sikh community who want visa-free passage into Kartarpur for pilgrimage.

The Indian government has expressed disappointment over Pakistan’s shifting stance on the Kartarpur Corridor project after the the’ first meeting on the matter earlier this week, The Hindustan Times reports.

The newspaper cited unnamed sources as saying that a spate of differences emerged during the 14 March talks, including those related to the number of pilgrims permitted daily, the number of days the corridor would be operational and a permit system for pilgrims.

“[Pakistani] Prime Minister Imran Khan’s initial announcement on the Kartarpur corridor, which will connect Dera Baba Nanak in India with Gurdwara Darbar Sahib in Pakistan, gave impression of a generous and open-ended offer, but Islamabad’s focus during the discussions this week was narrow and with a limited focus”, the sources pointed out.

They added that New Delhi was especially disappointed about Islamabad’s proposed introduction of the permit and fee system.

Their remarks come after government officials of two countries discussed the modalities of allowing passage to Indian pilgrims to enable them to pray at the historic Kartarpur Sahib gurdwara (temple) in Pakistan.

‘No Question of Any Major Conflagration Between India, Pakistan’ – Def Analyst
The 14 March meeting took place exactly a month after the Pulwama terror attack, in which 40 Indian soldiers were killed in Kashmir, triggering India-Pakistan tensions which culminated in the 27 February dogfight over the contested region.

India plans to build a passenger terminal building complex near the border town of Dera Baba Nanak in the Gurdaspur district of Punjab  by September 2019. The terminal will facilitate the movement of 5,000 pilgrims every day to Kartarpur located inside Pakistan, 4.5 kilometres from the international border.