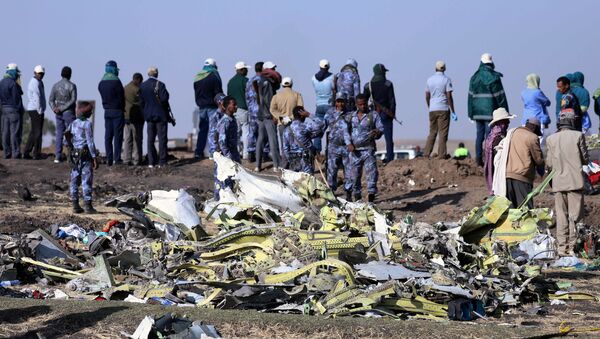 PARIS (Sputnik) - France’s Bureau of Enquiry and Analysis for Civil Aviation Safety (BEA) said on Saturday that its experts had downloaded data from the cockpit voice recorder (CVR) of the Boeing 737 MAX 8 aircraft that crashed minutes after takeoff from Addis Ababa last week.

"Data from the CVR has been successfully downloaded by @BEA_Aero and transferred to the Ethiopian investigation team / communication on their behalf / @BEA_Aero did not listen to the audio files", BEA wrote on Twitter.

The civil aviation safety agency noted that the work on the flight data recorder would resume the following day. The flight data and voice recorders of the Boeing 737 MAX 8 aircraft were delivered to France on Thursday after Ethiopia asked BEA for assistance in analyzing the jet’s black boxes.

Pilots Filed Complaints About Boeing 737 MAX MONTHS Before Ethiopia Crash
The Nairobi-bound Boeing 737 MAX 8 of the Ethiopian Airlines crashed early on Sunday. All 157 people from 35 countries who were on board were killed. The causes of the accident are yet to be investigated.

In the wake of the tragedy, which followed the similar deadly crash of Boeing 737 MAX in Indonesia in late October, aviation authorities and airlines around the world have either grounded their 737 MAX 8 series aircraft or closed their airspace to them.

Boeing, in its turn, said on Wednesday that it had "full confidence" in the safety of its 737 MAX aircraft but supported the decision to temporarily ground the entire fleet of 737 MAX 8 and 737 MAX 9 series planes after the crash.