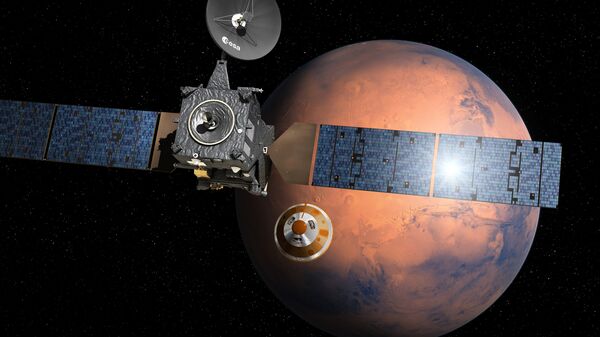 The orbiter is tasked with examining methane sources on Mars, which may or may not be a product of biological activity on the red planet.

The European Space Agency/Roscosmos jointly-developed spaceship Trace Gas Orbiter (TGO) has returned its first photos of the Martian surface. Among photos made by the spaceship's Colour and Stereo Surface Imaging System (CaSSIS) are images of NASA's InSight lander, Columbus crater and a strange ‘hairy' structure of almost biological appearance.

This is the first time a European spacecraft has imaged NASA's lander, Science Alert report says. The spacecraft, heat shield and parachute can be seen as tiny dots on the surface of the planet. The marks of the lander's landing engines are seen as a larger patch.

​Earlier, NASA's Mars Reconnaissance Orbiter — which arrived to the red planet in 2018 — returned images of the lander, University of Bern press release says.

Another stunning image is a strange hairy-looking structure that appears as a suggestive biological form. NASA scientists believe the structure may be "hundreds or maybe even thousands of smaller Martian tornadoes," also known as ‘dust devils.' The image is presented in false color for better contrast.

"In actual colour, the streaks would appear dark red," the press release says.

I launched into #space #OTD three years ago! 🚀🎂 To celebrate, as well as @NASAInSight's photo, I’d like to show you some of my favourite images I’ve taken of #Mars in the last months. This one👇 is particularly crazy! Can you guess what it shows? 📷 https://t.co/WQv792hAKs pic.twitter.com/Di5kkR23Pl

Science & Tech
'Sharp Triangular Piece' Allegedly Spotted on Mars Triggers Alien Speculation
TGO, developed by Russia's Roscosmos and the European Space Agency is a part of ExoMars program, tasked with finding and examining sources of methane and water vapor, which is said to exist in the Martian atmosphere.