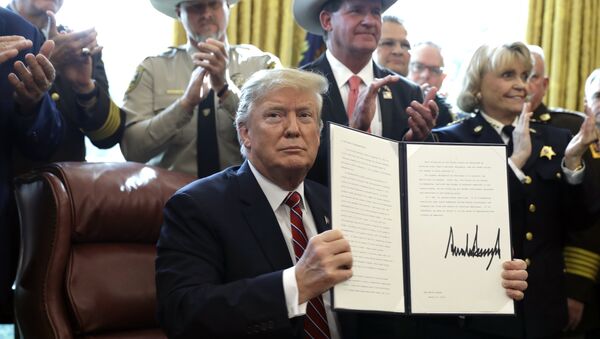 Marking a first during his presidency, US President Donald Trump signed his first-ever veto on Friday, rejecting a congressional resolution to overturn his decision to declare a national emergency at the US-Mexico border.

Surrounded by officials from the US Customs and Border Protection and family members of individuals killed by undocumented immigrants, Trump told reporters that lawmakers passed a dangerous resolution on Thursday, and that the measure would've ultimately put American lives at risk.

Trump went on to state that the Land of the Free is facing an invasion, and that the US' current immigration laws must be changed.

"It is definitely a national emergency, therefore to defend the safety and security of all Americans I will be signing and issuing a formal veto of this reckless resolution, and that's what it was," Trump later said at the signing ceremony. "Congress' vote to deny the crisis on the southern border is a vote against reality."

US Attorney General William Barr has said that Trump's declaration of a national emergency was authorized under the law.

Trump's move comes just one day after 12 Senate Republicans joined Democrats in rebuking the president's February 2019 decision to declare a national emergency as a means to redirect government funds to build a wall at the US' southern border.

"I look forward to VETOING the just passed Democrat inspired Resolution which would OPEN BORDERS while increasing Crime, Drugs, and Trafficking in our Country," Trump tweeted moments after the measure passed.

"I thank all of the Strong Republicans who voted to support Border Security and our desperately needed WALL!"

Trump's usage of the presidential veto power will send the resolution back to the US House of Representatives.

US Speaker of the House, Nancy Pelosi says the house will vote on March 26th to override Trump's veto.