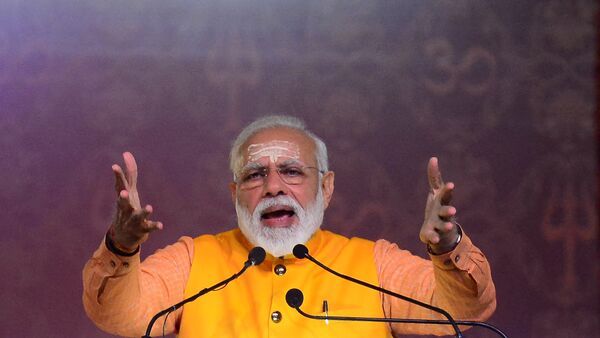 In 2018, UNEP bestowed Indian Prime Minister Narendra Modi with the ‘Champion of the Earth’ title for his bold environmental leadership on the global stage. Under Modi’s leadership, India pledged to eliminate all single-use plastics in the country by 2022.

New Delhi (Sputnik) — Pakistan has lodged a formal complaint with the United Nations accusing the Indian Air Force (IAF) of bombing a forest, causing considerable damage to the environment. In a two-page complaint written by an adviser to prime minister on climate change, Malik Amin Aslam, Pakistan has demanded that Indian Prime Minister Narendra Modi be stripped off the "Champion of the Earth' award title bestowed upon him by United Nations Environment Program (UNEP).

Pakistan claimed that IAF jets offloaded payload in a reserve area that is closed off under the ongoing "Billion Tree Tsunami" project in Pakistan.

Satellite Imagery Shows India Missed Target in Pakistan Airstrike - Reports
"India chose to surgically target Pakistan's natural asset to reign terror in the area of global natural significance…The "strike against nature" to be ostracised and condemned across the global community which values nature. The person who authorised this illegal act, Narendra Modi, deserves to be stripped off the ‘Champion of the Earth' title bestowed upon him by UNEP as his action clearly contradicts his "green" rhetoric," Malik Amin Aslam, advisor to Pakistan's prime minister on climate change, wrote in his letter to the UN.

After conducting the airstrike in Balakot of Pakistan during the early hours of 26 February, the IAF had claimed that it had completely wiped out a terrorist camp operated by Jaish-e-Mohammed (JeM), the group that had claimed responsibility for the 14 February suicide bombing in Pulwama, of India-administered Kashmir in which at least 44 Indian paramilitary personnel were killed.

Meanwhile, Pakistan continues to deny that there were any such camps in the area. The Pakistani media quoted locals as saying that besides damaging over 15 pine trees in the area, only one elderly villager was hurt in the air strike.