Not ‘Possible’ to ‘Decouple’ Chinese, US Economies - Premier Li Keqiang 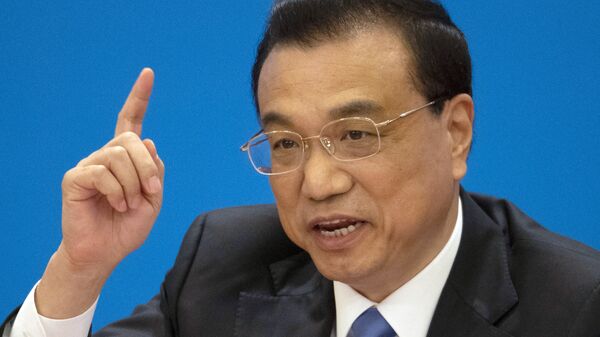 On Friday, Li Keqiang, who serves as the current premier of the State Council of the People's Republic of China, claimed that an economic decoupling of the US and Chinese economies is “neither realistic nor possible,” while rebutting claims that Chinese tech companies spy on foreign governments.

"I believe that result [a resolution of the US-China trade war] is also what the whole world would like to see," Keqiang said Friday after the annual National People's Congress in Beijing. "As two large economies, China and the US have become closely entwined through years of growing their relationship and years of cooperation. It is neither realistic nor possible to decouple the two economies."

China and the United States have been engaged in a trade war since US President Donald Trump announced in June that the US would subject $50 billion worth of Chinese goods to 25 percent tariffs in a bid to fix the US-Chinese trade deficit. The two countries have since exchanged several rounds of trade tariffs. Although the US and China have held off on introducing new tariffs since the G20 summit in Argentina in December, multiple trade consultations have yet to resolve the dispute.

On Friday, Li also dismissed claims that Beijing has or would instruct Chinese tech companies to spy on foreign governments.

In recent years, China has come under increasing criticism over its alleged widespread theft of intellectual property and economic espionage, with Chinese businesses being accused of stealing trade secrets from foreign companies to incorporate those technologies into their own devices.

"Let me tell you explicitly that this is not consistent with Chinese law. This is not how China behaves," Li said, when asked about the spying allegations, the South China Morning Post reported. "We did not do that, and we will not do that in the future."

"We need to continue to follow the principles of cooperation before confrontation, mutual respect, equality and mutual benefit to continue to grow the China-US relationship, including their economic and trade ties," Li added. "As for their differences and disagreements, we have confidence that people of the two countries have the wisdom and the capability to defuse their differences and manage them properly to pursue steady and sound growth of the US-China relationship."

Li also noted that Beijing needs "strong measures" to "boost the vitality of the market." In 2018, China experienced its slowest economic growth in nearly three decades, with its gross domestic product growing 6.6 percent, down 0.2 percentage points from its growth in 2017, according to data released by China's National Bureau of Statistics.

Li's comments come after the US, New Zealand and Australia banned the use of technology from Chinese telecommunications giant Huawei in the development of their 5G networks in 2018, citing security threats.

In early December, Huawei CFO Meng Wanzhou was detained in Vancouver, Canada, at the request of the US, on suspicions that she conspired to violate US sanctions against Iran.

The arrest was denounced by both Huawei and Beijing, with Chinese authorities demanding that Canada immediately release the Chinese national. Earlier this month, Meng, who faces extradition to the US, filed a lawsuit in Canada, claiming her constitutional rights were violated during her arrest. The company itself also intends to file a lawsuit against the US administration over its law banning US federal agencies from purchasing Huawei products.