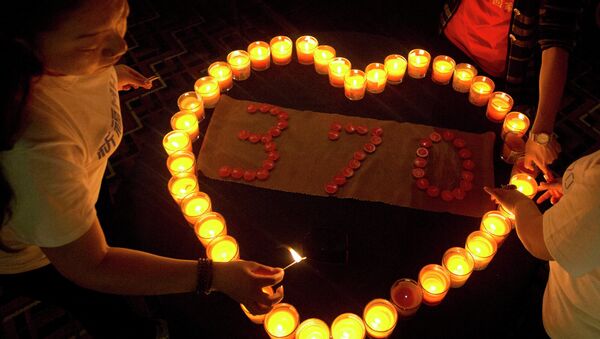 © AP Photo / Ng Han Guan
Subscribe
International
India
Africa
The plane hunter who found the suspected MH370 debris in question claimed that he'd started receiving death threats “a few months” prior to the murder of the Malaysian official who was supposed to deliver the wreckage to Kuala Lumpur.

Local authorities are investigating a possible connection between the two suspected MH370 fragments found in Madagascar and the murder of Honorary Consul of Malaysia Zahid Raza who was gunned down in Antananarivo in August 2017, and who was supposed to deliver said wreckage to Malaysia, news.com.au reports.

World
From Terror Plot to Mass Hypoxia: Five Theories on MH370's Disappearance
Blaine Gibson, "American plane hunter" who found the debris in question, has revealed in an exclusive interview with the media outlet that the wreckage still remains at an undisclosed location in Madagascar despite Malaysian authorities asking for its delivery.

"The diplomat was murdered eight days after I handed those pieces in. I don’t know if they are related, but the timing is highly suspicious", he said.

As the media outlet notes, Madagascar police’s reluctance to part with the wreckage may hint at the fact that the cops are “not ready to rule out a possible link between the diplomat’s murder and MH370”, despite speculations about Raza being killed in revenge for his alleged role in the 2009 abduction of several members of Madagascar's Indo-Pakistani community.

The plane hunter also complained about locals becoming suspicious of him and his motives when he started discovering pieces of the plane debris in Mozambique in 2016, and that it became much worse when he shifted his search to Madagascar.

"The death threats began in December 2016. [On one occasion], someone called a friend of mine and warned them that I would not leave Madagascar alive. A few months later, the diplomat was murdered," Gibson said.

The media outlet also pointed out that "a pair of MH370 obsessives" named Andre Milne and Daniel Boyer accused Gibson of "pillaging" the  MH17 debris field and "passing off the fragments as MH370 wreckage".

Malaysia Airlines Flight MH370 vanished above the South China Sea while en route to Beijing from Kuala Lumpur in March 2014, after making a leftward detour and flying toward the Indian Ocean; an extensive search operations launched after the plane’s disappearance yielded no results.