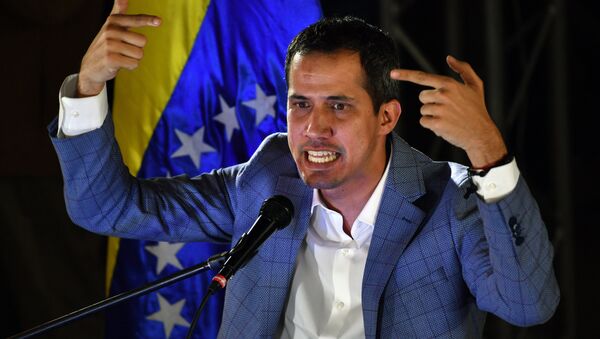 President Nicolas Maduro has been stepping up pressure on Western governments that support Venezuela's opposition leader Juan Guaido, forcing out all American diplomats and kicking out a German envoy.

Juan Guaido has escalated his rhetoric against Nicolas Maduro, claiming that Moscow and Beijing in fact do not endorse the country's government, despite their diplomats stating the opposite.

"They [Maduro's government] do not have any international allies; it is not true that Russia and China are with them. That's a great fallacy. No one is with them," the self-declared Venezuelan leader claimed at a rally in Caracas on Thursday.

He added, without going into further details, that both Russia and China are "very clear" about what their interests are in Venezuela — apparently implying that they are driven by economic and other interests in reaffirming their support for Maduro.

Moscow and Beijing, two of Venezuela's major creditors, have repeatedly stressed that they support the elected president and that they are against any military options in the crisis-thorn Bolivarian republic.

Guaido's comments, incidentally, came on the heels of a report that he had offered to sell off Venezuela's oil to private companies and gained approval from the United States. He is said to have drafted a legislation that will give private firms more leeway in operating local oil fields, overriding the more protectionist laws adopted under late Hugo Chavez.

The opposition leader spoke at the rally the same day Russian Foreign Minister Sergei Lavrov told his Venezuelan counterpart Jorge Arreaza that Moscow's support for Maduro is "unwavering" and that Venezuela is an "equal member of the international community".

Lavrov spoke with Arreaza on the margins of the session of the UN Commission on Narcotic Drugs in Vienna. US officials, alongside diplomats from allied countries, have walked out of the meeting, claiming that the Venezuelan delegation represented the "illegitimate government" and could not be considered as speaking on behalf of the Venezuelan people.

It came as yet another sign of deteriorated relations between the Western governments — the US in particular — and Nicolas Maduro. On Thursday, US Secretary of State Mike Pompeo confirmed that all American diplomats had left Venezuela following a request from Caracas.

A spokesman for the Chinese Foreign Ministry said in late January that China would continue developing its cooperation with Venezuela in different fields, saying that US sanctions against the South American country will be to blame for lower living standards of Venezuelans.

Washington, along with a spate of Latin American countries, has criticised Nicolas Maduro for his alleged attempts to undermine democracy and committing fraud to win elections.

The United States was among the first countries to throw their weight behind Juan Guaido after he declared himself interim president and called on Maduro to step down in late January.

Russia, China, Bolivia, Iran, Mexico and Turkey, among other nations, continue to support Nicolas Maduro. Russia and China have been shipping humanitarian aid to Caracas, where economic and sanitary conditions have rapidly deteriorated in the past months. Maduro, meanwhile, has refused to accept humanitarian aid from the United States, saying that it could be a pretext to a military intervention.