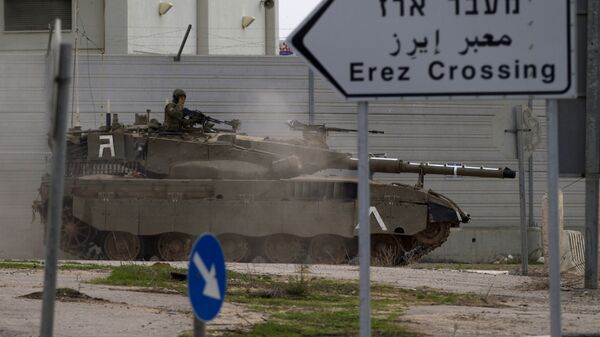 TEL AVIV (Sputnik) – The Israeli troops attacked around 100 targets in the Gaza Strip early on Friday in response to the shelling of Jerusalem from the Palestinian territory, spokesman for the Israel Defense Force Avichay Adraee said.

"In response to the rocket fire at Israel, some 100 terrorist targets have been hit across the Gaza Strip," Adraee wrote on his Twitter page.

He added that Israel held the Hamas Islamist movement responsible for the attacks launched from the Gaza Strip.

On Friday, air raid sirens sounded in Tel Aviv for the first time since summer 2014 as the IDF registered the launches of two rockets from the Gaza Strip. Several more rockets were fired at the southern part of Israel.

🚨INITIAL REPORT: Sirens sounded in the city of Sderot and the Sha’ar HaNegev Regional Council. Details to follow. pic.twitter.com/aUgpATKxKu

Earlier in the day, the IDF pounded alleged Hamas targets in Gaza in response to the first since 2014 attack toward the Israeli capital. Notably, the Palestinian movement said it was "not responsible for the rockets fired on the enemy". In the early hours of Friday, Israeli Prime Minister Benjamin Netanyahu held a meeting with the heads of security agencies after the Tel Aviv attack.

IDF Pounds Gaza in Response to Recent Attack Toward Tel Aviv
The new wave of escalation near the Gaza border began last March, when Palestinian protests, dubbed the Great March of Return, began. The tensions further mounted in fall due to continued shelling and arson balloons launches from Gaza into the Israeli territory and Israeli strikes on Palestinian targets in response to these actions.