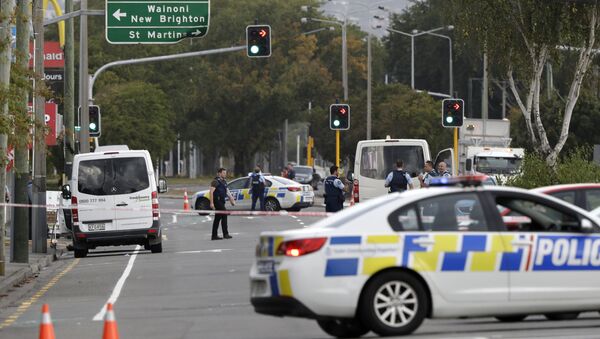 The news comes in the wake of deadly shootings in the city of Christchurch at two mosques. According to the New Zealand prime minister, the "terrorist attack" was "well-planned."

According to the New Zealand Herald, police have arrived at the scene after at least two blasts have been heard in the city of Auckland, New Zealand.

As reported by Newslink, a bomb-disposal squard has conducted a controlled explosion in downntown Auckland near a train station and a mall.

Earlier in the day, local media wrote that parts of Britomart train station in Auckland are cordoned off after reports of a suspicious item.

Police have yet to comment on the information, which follows mass shootings at two mosques in the city of Christchurch, leaving at least 40 dead. New Zealand Prime Minister Jacinda Ardern stated that the shootings was a "terrorist attack," adding that it was "well-planned."

PewDiePie 'Sickened' by NZ Shooter Uttering His Name Ahead of Mosque Rampage
The statement followed an announcement made by the Australian prime minister, who said that the shooting suspect was an Australian citizen and an "extemist." Earlier, media reports suggested that the person behind the shooting is a 28-year-old Australian citizen who called himself Brenton Tarrant in a "manifesto" he published before the attack.

The shooting happened in the afternoon on Friday, the Stuff news outlet reported. The outlet added, citing former president of the Muslim Association of Canterbury, Mohammed Jama, that around 01:40 p.m. local time on Friday, a gunman entered a mosque in Christchurch and opened fire.