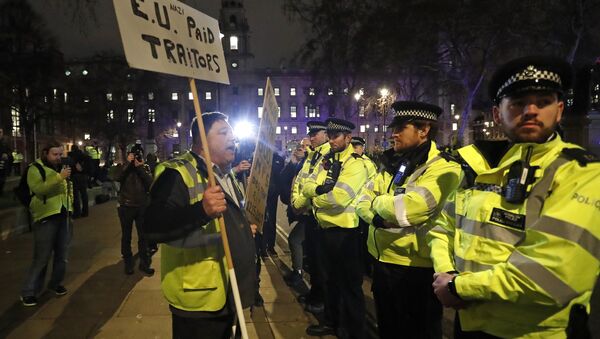 © AP Photo / Frank Augstein
Subscribe
LONDON (Sputnik) - UK Green Party Home Affairs Spokesman Shahrar Ali expressed confidence in comments to Sputnik that Parliament would support the extension of the Brexit deadline past March 29 and that a second referendum on the issue would become a probable option if the government fails to present viable divorce arrangements.

UK Govt to Propose Brexit Delay Until 30 June if Deal With EU Approved
Earlier in the week, UK lawmakers inflicted another major defeat to Prime Minister Theresa May by rejecting the updated Brexit agreement by a 149-vote margin and then voting against the possibility of leaving the bloc without a deal. On Thursday evening, the lawmakers will vote on prolonging the withdrawal process.