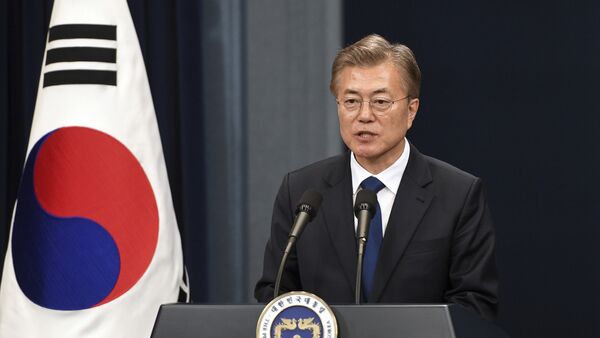 TOKYO (Sputnik) - The South Korean president's drop in approval ratings echoed the population's distrust of the government after unsuccessful talks between US President Donald Trump and North Korean leader Kim Jong-un about the denuclearization of the Korean peninsula, according to a new poll.

"This can be explained by the fact that the population is growing increasingly distrustful of the government following the unsuccessful second summit between North Korea and the United States, during which no agreements were made," a poll released on Thursday showed.

The results come after South Korean pollster Realmeter surveyed about 1,500 adult South Koreans between Monday and Wednesday and found that South Korean President Moon Jae-in's approval fell to 45 percent, the lowest it has been since he took office in May 2017.

US State Department Does Not Rule Out New Sanctions on North Korea
Late February, Trump and Kim Jong-un met in Hanoi to discuss North Korea's commitment to denuclearize. However, Trump walked away from the meeting abruptly when Kim demanded that the US president lift all sanctions. As a result, no agreements on the issue of denuclearization were signed.

In 2018, Moon's approval ratings increased to over 70 percent following his historic meeting with Kim, the first of three inter-Korean summits. South Koreans expressed optimism about the prospect of denuclearization of the Korean peninsula which has been divided into two countries with drastically different economic and political systems since 1948.