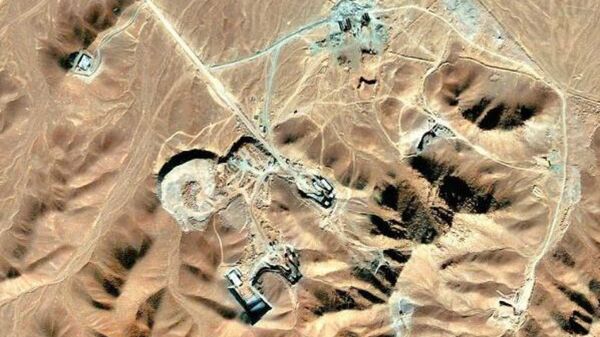 A report published by the Institute for Science and International Security (ISIS), a Washington-based think tank, claims Iran's Fordow facility, also known as Al Ghadir, is older than Tehran claims.

The facility, said to have been used to enrich uranium for making nuclear bombs, was officially constructed in 2007. However, the ISIS report cites the so-called "Iranian nuclear archive" presented in 2018 by Netanyahu, alleging that in reality the site already existed in 2004 and that its construction probably began all the way back in 2002.

Geospatial imagery obtained by the Institute shows that construction on the then-secret Fordow enrichment plant, aka Al Ghadir, was well underway by 2004/2005. https://t.co/LFt0NvPTbu pic.twitter.com/LjnMineHnQ

​The nuclear facility was first discovered in 2009, The Jerusalem Post reports. The discovery and the ensuing diplomatic crisis was the catalyst for the sanctions originally imposed on Tehran by the UN Security Council. In 2015, after years of negotiation, Iran, the EU and six other nations signed the famous nuclear deal, which lifted sanctions in exchange for Iran abandoning its nuclear weapon aspirations.

Iran repeatedly denied that the Fordow facility was intended to produce weapons-grade uranium, saying that it was tasked only with producing low-enriched uranium for power plants.

"The Nuclear Archive raises again the deception of Iran about its past nuclear weapons activities and raises profound questions about the true purpose of this facility," the ISIS report says.

JCPOA Doomed? US Could Use All Tools to Push EU Out of Iran Nuclear Deal - Prof
The think tank's director, David Albright, said in an interview with the Jerusalem Post that the Fordow facility could be used to produce one to two atomic bombs per year.

The "Iranian nuclear archive" was unveiled in April 2018 by Netanyahu, who said it was obtained during an Israeli intelligence operation. During the presentation of the "archive," Netanyahu claimed it included 55,000 pages and 183 CDs, which the Iranians kept in what he described as a "derelict warehouse."

The presentation was met with limited interest, with The New York Times calling it "Netanyahu's Nuclear Nothingburger" and a "dog and pony show," and explaining that most of the information in the alleged archive had been known since circa 2007.

The Iran nuclear deal, known officially as Joint Comprehensive Plan of Action (JCPOA), was signed in 2015 by Iran, China, Russia, EU, UK, US, France and Germany. The participant countries continue to adhere to the deal, despite US President Donald Trump's 2018 decision to unilaterally withdraw from it.