US to Cooperate With Nations Regardless of Human Rights Record – Pompeo 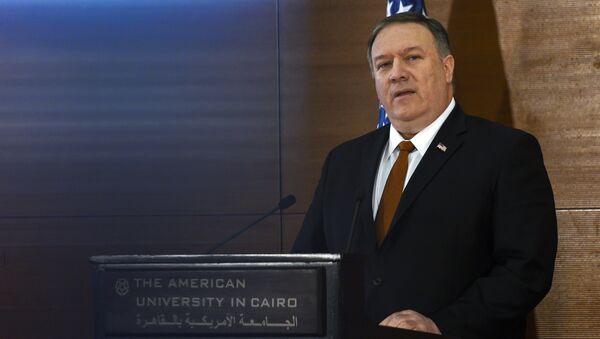 The US State Secretary has disclosed the great secret of Polichinelle of US foreign policy: that, as far as international relations are concerned, economic interests always outweigh humanitarian issues.

The United States will work with any nation in the world as long as it serves American interests, regardless of that nation's human rights record, US State Secretary Mike Pompeo said Wednesday — an unusually straightforward and frank comment on American foreign policy.

"The policy of this administration is to engage with other governments, regardless of their record, if doing so will further US interests," Pompeo said while prefacing of the State Department's annual report on global human rights practices. He added, however, that the State Department recognizes that American interests are best served by nations that respect human rights.

Finding a balance between a pragmatic, realpolitik approach to foreign relations and a self-proclaimed role of global human rights watchdog has been a core problem of US foreign policy for generations, as the reality of international relations demonstrates that the two priorities do not always coincide.

US Intends to Drive Iranian Crude Oil Output to Zero - Pompeo
The US' tight ties with Saudi Arabia are probably the most notable example: President Donald Trump struck an enormous $110 billion arms deal with Riyadh, which he, naturally, had to defend after the murder of Saudi dissident journalist Jamal Khashoggi. China is another major trade partner of the US, yet Washington continues to criticize Beijing for its treatment of the Uygur population and freedom of speech issues.

Historically, however, Pompeo's groundbreaking confession is not so groundbreaking at all. In fact, it is a logical extension of the so-called Mann Doctrine, formulated by Thomas Clifton Mann at a conference for all US ambassadors to Latin America in 1964. According to this Cold War-ear doctrine, the US made a decision not to intervene into states run by dictators, as long as they served US economic interests and didn't cooperate with the Communists. Basically, Mann prioritized US interests over political values and human rights records.

"He announced that Latin American countries would now be judged on how they promoted US interests, not those of their own people," Oliver Stone and Peter Kuznick's 2012 book "The Untold Story of the United States" say about Mann.

Pentagon Tracked Human Rights Violations in Afghanistan on Excel - Report
The only difference is that Mann's speech was supposed to be secret, while Pompeo said it out loud.

In fact, this policy can even be traced to 19th century British Prime Minister Henry John Temple, 3rd Viscount Palmerston, who, albeit in a slightly different context, said that nations have no permanent friends or allies, only permanent interests.

The overall artificial nature of "human rights" issues becomes evident from the report presented by Pompeo Wednesday. For example, the file on Russia cites numerous violations that are, to put it frankly, simply not true.

For example, the document accuses Russia of "severe restrictions on religious freedom" and "banning of online anonymity," among other evils. In Russia, any person can follow any religion without repercussions; however, Russian national security agencies did perform a massive crackdown on hundreds of destructive authoritarian sects between 1999 and 2010 that had tricked people into giving their money and property to self-declared "preachers." As for "online anonymity," citizens are required to provide their mobile phone number to gain access to public Wi-Fi networks, which does not prevent them from engaging in anonymous communication at corresponding websites.

US, Taliban Make 'Meaningful Progress' in Talks - State Department
Human rights issues have served Washington well as a pretext for intervention or political pressure against certain nations when the US saw fit. The notorious NATO intervention in Yugoslavia, which led to destruction of the multinational state, used "ethnic cleansings of Albanians" as a pretext. More recently, US officials have shifted their focus to nations such as Iran and Venezuela, because doing so fits Washington's current foreign policy priorities.

Obviously, this convenient foreign policy tool becomes a liability when business interests become a priority, and Pompeo finally said what everybody was thinking.