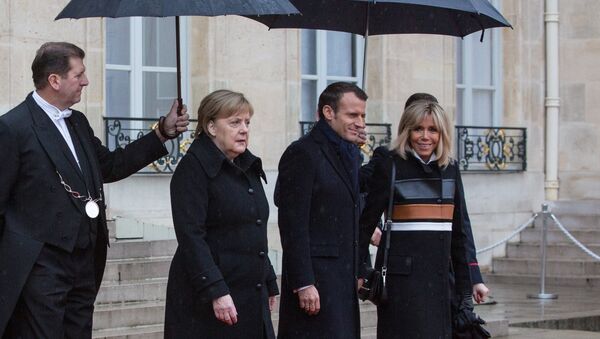 BRUSSELS (Sputnik) - France and Germany, the two EU powerhouses, seem to have different views on Europe's future, while the EU election is less than three months away.

French President Emmanuel Macron was the first to lay out his vision for Europe as his op-ed was published in several newspapers on March 4. The French president called for a review of the visa-free Schengen zone and urged for a European council on internal security; suggested introducing a minimum wage in Europe adapted to the needs of each country.

Annegret Kramp-Karrenbauer, the leader of Germany's Christian Democratic Union (CDU), published an essay on Europe days after Macron's article was released. Kramp-Karrenbauer, often referred to as AKK, replaced Chancellor Angela Merkel as the head of CDU in December. As the leader of the largest party in the German parliament, she may well become the next head of the government, when Merkel's term ends.

READ MORE: France Has Perception of Shifting of Geopolitical Centre Towards East — Scholar

Macron Understands Globalisation Didn't Benefit Everyone in EU - Scholar
Kramp-Karrenbauer's vision for Europe differs from that of Macron. For instance, she objects to "communitarisation of debts, the Europeanisation of social systems, and the minimum wage."

The German politician suggested that the European Parliament should give up its Strasbourg seat. The idea did not go down well in France. Roland Ries, the mayor of Strasbourg, told Le Point outlet that the parliament's premises in Strasbourg had a symbolic meaning and contributed to the separation of different branches of power.

Both Macron and Kramp-Karrenbauer agreed that there should be a European Security Council including the United Kingdom. However, the German politician mentioned the need for the bloc to have a permanent representation in the UN Security Council, which could be seen as a play for the French seat. This proposal was backed by Chancellor Merkel.

READ MORE: Merkel Distances Herself From 'European Renaissance' Letter in a Blow to Macron

"Emmanuel Macron is always talking about Europe when he means the European Union. This is wrong, because not Europe, but only the European Union is in danger due to economic, bureaucratic and political mismanagement by the EU elites. Macron must first solve the massive problems of France — and without German tax money, please — before he explains to other countries what they should do," Meuthen told Sputnik.

However, Meuthen is critical of Kramp-Karrenbauer, too.

"We keep the same policies in place with a few added improvised ideas, such as building a plane carrier," Meuthen said.

Merkel has, in fact, supported her successor's idea of an EU aircraft carrier.

French member of the European Parliament Dominique Bilde argues that "Macron is more weakened than ever on the European scene."

"And if he does not give up after the Great Debate, he will aggravate his case in France," Bilde told Sputnik.

The Grand Debate was an initiative launched by Macron in response to large-scale protests in France. The protests began in mid-November as a reaction to the government's plan to raise fuel tax. The public discussions aim to identify French people's concerns and find answers.

Michel Liegeois, a professor at the UCLouvain university, points out that these differences between France and Germany were highlighted only a few months away from the European election.

"At two and a half months of the European elections, France and Germany seem to be moving in different directions. This is a crisis in itself if the French-German couple shows disunity in Europe," Liegeois told Sputnik.

French member of the European Parliament Mireille d'Ornano believes that this marks an inauspicious start to Macron's election campaign.

"Emmanuel Macron starts his campaign for the European elections very badly. His article in the European press has been a flop, first in France where most voters enjoy watching him try to save Europe while he cannot even solve the French problems raised by the yellow vests. A flop in Europe too, where the reactions were at best polite, at worst resolutely hostile," d'Ornano told Sputnik.

The European elections will be held on May 23-26, and French LREM party, founded by Macron, will be among the contenders.