Report From Calais Where I’m Attacked by Migrants, Police Stand by 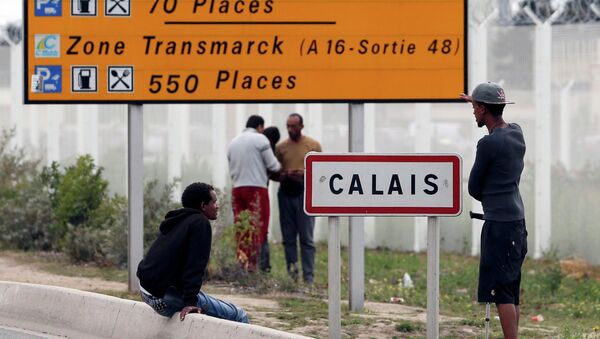 Janice Atkinson
All materials
No politician from the EU or UK has visited Calais and northern France as much as I have. I've met the mayors, police, migrants, NGOs and have been into the various jungles. I went again two weeks ago, for the first time with security.

We are being lied to by the MSM and our politicians that the migrant crisis in Calais is over. All done, nothing to see here folks, but a few hundred desperate souls trying to make their way to the UK.

We see them bobbing up and down in the English channel, saved by the RNLI, risking their own lives, brought ashore by our brave rescuers.

Sajid Javid took a very strong stance over Christmas, legs akimbo for the photo shoot, he's getting tough with this invasion, he called it a ‘major incident'. He's going to deploy the Royal Navy in the Channel and bring back our cutters from the Mediterranean which are down there trying to stem other migratory flows to also defend our neighbours' borders.

Yet still, they come, day in and day out.

Sajid says the migrants are desperate because they are being told that after Brexit our borders will be closed.

This is another lie.

READ MORE: UK to Spend Over $7Mln on High-Tech Equipment in Calais to Stem Migrant Tide

I spoke to many migrants in Calais and the port of Ouisterham (Caen), who have never heard of Brexit. Will Brexit mean a magical pop-up border will suddenly appear, keeping them out?

There are at least two thousand that I could see who are roaming free, just waiting their chance to break into the backs of lorries or cars heading for the UK.

We watched and filmed them.

In Ouisterham, we interviewed a number of Africans, all fit young men, well dressed and clean (thankfully for them), who had been told by the NGOs not to speak to us. But I gained their trust as I told them I was an MEP. They told me how they hate the media, reserving particular scorn for the BBC.

As we started to get some sense from them another African appeared out of nowhere and started attacking his friends and us with verbal abuse. The mood turned nasty and we retreated to our car.

We drove to our hotel, 200 metres away. Directly outside the hotel entrance were around 150 migrants, camped in trees and by the canal in makeshift tents.

The jungles had been closed by Macron and dispersed around France in order to make him look tough. Most of them had returned to northern France, looking for their gateway to the UK. NGO statistics say 93% want to live in the UK, not France, with one saying he would rather die in the channel than be picked up by the French police again. 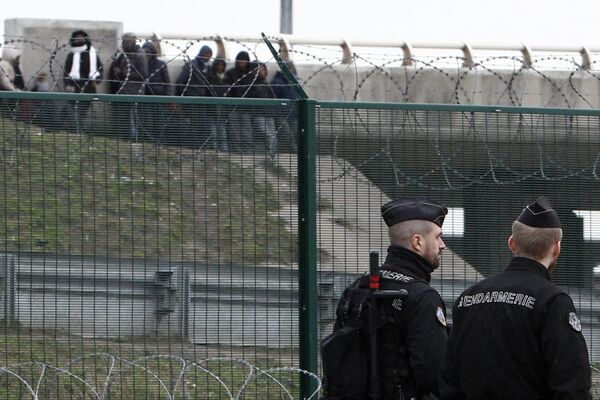 Migrants, background, watch French gendarmes patrolling on the road leading to the port in Calais, northern France, Friday Feb.2, 2018. Police reinforcements are arriving in the French port city of Calais after clashes among migrants left 22 people injured, as the interior minister warned of a worrying spike in violence
© AP Photo / Michel Spingler

Our hotelier told us that her business had dropped by 50% in the past year. That local houses had been robbed, that women had been sexually assaulted and UK cars targeted.

She told me the French police do nothing. We witnessed this.

We drove down to Ouisterham's port, which is small, open and accessible. The French military police kept watch, complete with guns. They told me they were not allowed to speak to me because of orders direct from Paris.

We had dinner with local Yellow Vest campaigners and businesses. They felt their towns were under siege with the police standing by and doing nothing.

As we drove back in our Belgian registered car, it was attacked by two Africans, they kicked the doors, banged on the windows and tried to open the doors, we were driving at 40mph. A third African tried to head us off the road. Standing by, with guns, were two police officers watching, they made no attempt to intervene.

The next morning we drove to Calais. I had three close protection officers who had carried out surveillance the day before. I needed them.

There are at least two thousand migrants that we could count. In one temporary pop-up camp there were around two hundred migrants, the vast majority of whom were young African men.

We met a couple of Afghans who were playing cricket, one Slovenian and two Iranians.

The Iranian was middle class, well dressed and spoke pretty good English. He had arrived the day before and had already tried to get into the UK via border control. He seemed perplexed that he had been rejected.

He told me ten of his family, including his wife, had already been people smuggled into the UK via Holland and Denmark.

He separated from them and bought himself a fake passport in Greece for €500. Unfortunately for him, it was a Polish passport. I didn't have the heart to tell him that there a very few Iranians in Poland, it was a bit of a giveaway. I liked him.

They all had stories to tell. From the Afghan who was initially friendly and then turned angry claiming PTSD and mental illness. And the Africans who thought it was their human right to reside wherever they wished. One just wanted to get into the UK to claim residency in Canada. He'd been trying for two years to break in to the UK. They all openly admitted they were economic migrants and we owed them jobs, houses and benefits, it was their human right.

When three silly middle-class English girls arrived from some NGO, sounding like graduates from Cheltenham Ladies College, and spoke to the migrants, the migrants turned on us.

They surrounded our car, surrounded us and became threatening. Our cigarettes, water and fruit had been grabbed, we were no longer useful. They tried getting into the boot of the car where camera equipment and bags were locked away.

We made it to the car with migrants trying to force their way into the car and impede our departure.

We went down to the motorway underpass to film the impressive fences that had been erected by France, paid for by the UK taxpayers at a cost of £100m. What had we got for our ‘security' money?

Just on the slip road, towards the ferry terminal, you come across the beach, protected by a low wire fence. I just stepped over it on to the beach, beyond were the WWII bunkers where the migrants were camped, waiting for the people smugglers to arrive.

I interviewed truckers and a British owner of a fantastic truckers motel. They all told the same story. If migrants are found in the lorries they are ejected and popped back over the fence by police. If the migrants threaten with knives and weapons, they are taken to the police station, told off and let go.

The truckers say their lives and livelihoods are at risk. Recently, a Polish driver died when his truck hit a migrant roadblock. His cab went up and flames and he died, burnt to death leaving a wife and children behind.

The French under Macron are not our friends.

The UK has given him £100m for ‘security' but I exposed this sham.

He's told his police and military police to look tough, wave your guns around, it's good for the photo opportunities. But do nothing, don't arrest, turn a blind eye to the migrants in the boats, the people smugglers, the illegal camps, the criminals. They're off to the UK, it's not our problem.

We cannot trust this snake oil salesman. No wonder the Gilets Jaunes see no end to their protests. Macron is happy to turn his black-shirted gendarmes on his own people, to maim, kill and arrest.

He should be arresting and deporting the migrants committing criminal acts every day in northern France.

So, Jajid, the migrants in the English channel are not the ‘major incident' you claim, you're all PR spin. The real problem are the thousands of migrants gaining illegal entry through trucks week in week out, year on year putting our truckers lives at risk.