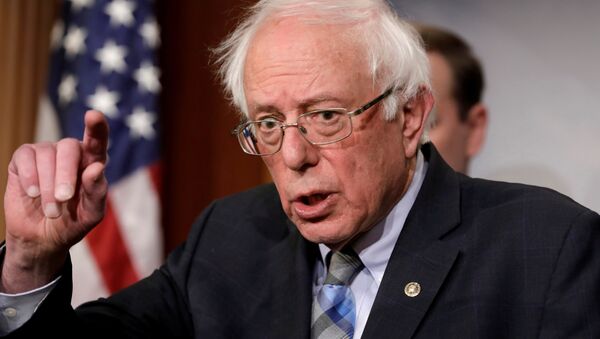 WASHINGTON (Sputnik) - Congress needs to end US backing for the Saudi-led intervention in Yemen’s conflict during a historic vote on Wednesday because American participation has never received congressional approval, Senator Bernie Sanders said in a press release.

"In December, the Senate made history by passing this same resolution", Sanders said on Tuesday. "The humanitarian catastrophe has only gotten worse in Yemen, and our intervention there is every bit as unconstitutional as it was then".

READ MORE: Trump: US Citizen Held Hostage in Yemen 'Has Been Recovered'

Neither tally came close to the two-thirds majority needed in both houses of the US Congress to override a likely presidential veto.

‘Time For Congress to Step Up': US Lawmakers Seek to End US Involvement in Yemen
Yemen has been engulfed in a violent conflict between the government headed by President Abd Rabbuh Mansur Hadi and the Shiite Houthi movement, also known as Ansar Allah, backed by army units loyal to former President Ali Abdullah Saleh, for several years. The Saudi-led coalition has been carrying out airstrikes against the Houthis at Hadi's request since March 2015.

The Trump administration came under fire last year when the US State Department, for fear of losing some $2 billion in arms sales to the Gulf States, certified that the Saudi-led coalition was trying to avoid civilian deaths. The certification is required by US law to authorize military aid.