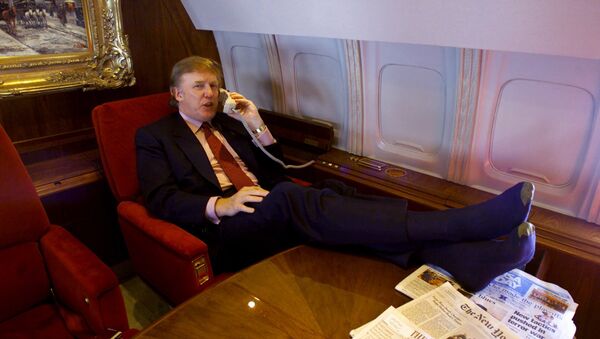 The US president has added another item to the list of his pet-peeves that he continues to lambast on his Twitter account. In addition to slamming failing media aka “enemies of the people”, fake news producers, presidential harassment and witch hunt, he gave way to his rage against machines that are too difficult to control.

In the wake of the unprecedented demarche against US-based Boeing, with numerous countries’ aviation regulators and airlines temporally suspending 737 MAX 8 jets following two deadly crashes, the US president entered the fray about flight safety on Twitter. While many are criticising the country’s authorities Federal Aviation Administration for their refusal to ground the jets in question, Donald Trump lashed out at the modern planes which “complexity creates danger” and “need computer scientists from MIT” rather than pilots.

….needed, and the complexity creates danger. All of this for great cost yet very little gain. I don’t know about you, but I don’t want Albert Einstein to be my pilot. I want great flying professionals that are allowed to easily and quickly take control of a plane!

​The angle that Trump chose raised some eyebrows as many started mocking him.

Trump's plan for the future of aviation!

The new model of Air Force One is coming along nicely! pic.twitter.com/ToBaqqfwyU

My dude, you cannot even functionally operate an umbrella. Sit this one out.

​Others lambasted his hate for technical progress.

The President just came out against technological progress.

Listen up Grandpa Caveman. The horse & buggy, coal, cars that start with people who run on bare feet & airplanes that fly unassisted by computers are not coming back

You stick to eating hamberders & leave the innovation to people who didn’t pay for their A grades in Kindergarten pic.twitter.com/lXX5MXMnVx

Just because you can’t do something, doesn’t mean someone else can’t. I’m so curios what other products you don’t know how to use.

​Some debated that Einstein in the cockpit would be a bad idea.

Thank you for saying this, sir. Albert Einstein once tried to fly a plane I was on and it was pure chaos.

​The FAA has come under fire as half a dozen US lawmakers have written to the regulator to ground the US fleet, including Senators Elizabeth Warren, Mitt Romney, Ted Cruz, Richard Blumenthal, Bob Menendez, and Dianne Feinstein. Both the commerce committee of the House of Representatives and the Senate subcommittee on aviation and space promised to set up hearings on the matter.

Following a deadly crash of Ethiopian Airlines flight 302 Sunday that killed 157 people, airlines and governments across the globe began grounding the 737 Max 8 aircraft. Countries that have grounded their 737 MAX 8 fleets include China, India, Indonesia, Singapore and the European Union, together amount to two-thirds of the world's 737 Max 8 jets. But the US and Canada have decided not make any hasty decisions about the aircraft.

It happened just months after the crash by another 737 MAX 8 last October when Lion Air Flight 610 plunged into the Pacific Ocean shortly after departing Indonesia's Koekarno-Hatta Airport. A preliminary report on the October tragedy found that pilots had been misled by a new feature on the plane's flight control system.