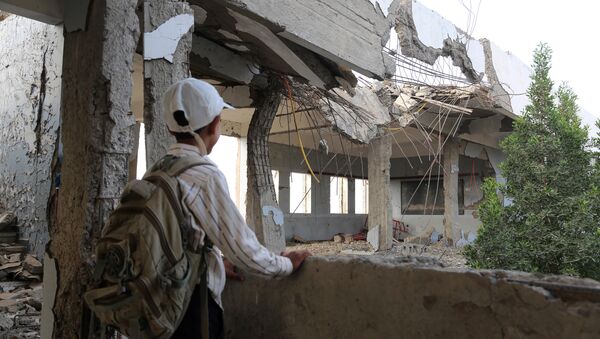 © AFP 2021 / STRINGER
Subscribe
WASHINGTON (Sputnik) - The Trump administration opposes a Senate joint resolution to end the US role in the Yemeni war and the president's advisers recommend vetoing the measure, the White House's Office of Management and Budget (OMB) said in a notice released on Wednesday.

Later on Wednesday, the US Senate is expected to consider the resolution condemning US involvement in the Yemeni conflict. If passed, the resolution will go to the House of Representatives, which approved its version of the bill in February.

The White House said the resolution would have a negative effect on bilateral relations in the region as the United States seeks to prevent the spread of violent extremist groups like al-Qaeda in the Arabian Peninsula* and the Daesh* terrorist group in Yemen.

‘Time For Congress to Step Up': US Lawmakers Seek to End US Involvement in Yemen
The OMB notice said the resolution would raise serious constitutional concerns because it seeks to override the US president's constitutional powers as commander in chief. In addition, the notice said the measure would establish a bad precedent by defining defence cooperation, including aerial refuelling, as "hostilities".

Since 2015, the United States has provided members of the Saudi-led coalition in Yemen with assistance such as intelligence sharing, logistics support and, until recently, aerial refuelling, the notice said.

Yemen has been engulfed in a violent conflict between the government headed by President Abd Rabbuh Mansur Hadi and the Shiite Houthi movement, also known as Ansar Allah, backed by army units loyal to former President Ali Abdullah Saleh, for several years. The Saudi-led coalition has been carrying out airstrikes against the Houthis at Hadi's request since March 2015.