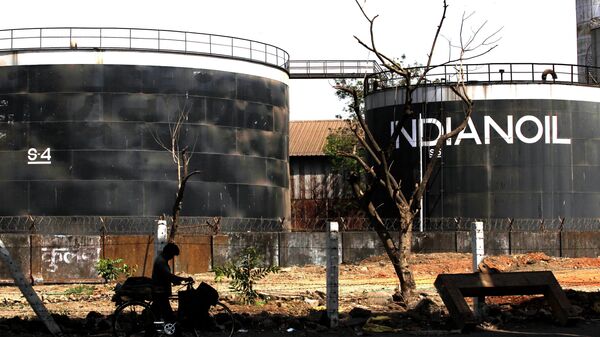 When asked about the West's Russia sanctions, Singh called those sanctions "fairly specific".

What US Sold to India in 10 Years, Russia Sold in Last 6 Months
Indian Ambassador to Russia D. Bala Venkatesh Varma told Sputnik in December that India intended to increase its energy cooperation with Russia regardless of the current sanctions policy against it. Prior to that, Russian President Vladimir Putin said in October that Russia was ready to consider cooperation with India in a number of energy projects in the Far East, and in projects on natural resources development in Siberia.

In 2014, relations between Russia and the West deteriorated over Moscow's alleged involvement in the Ukrainian conflict and Crimea's reunification with Russia. The United States and the European Union have since imposed several rounds of sanctions on Russia's energy, banking, defense and other sectors, as well as on a number of Russian officials.

"Definitely, whatever amount [of oil] Venezuela was producing, we fear if that crude is out of the market, probably, there might be some impact […] Although, as far as supplies are concerned, I am sure the rest of the countries will be able to make up the supplies. So crude supplies are probably not in concern, but it may impact to certain extent the prices", Singh said. Singh also specified that IndianOil did not have any contracts for the Venezuelan crude oil.

"Before this issue, we also did not have any Venezuelan crude", the chairman indicated.

Indian Private Oil Firms 'Afraid' of US Sanctions on Venezuela's PDVSA - Pundit
The United States has imposed several rounds of sanctions on Venezuela in response to the political developments in the country. The United States, in particular, has recently blocked $7 billion in assets belonging to Venezuela’s state-owned oil company PDVSA. Venezuelan President Nicolas Maduro has slammed the US sanctions against his country as tantamount to an illegal seizure of Venezuela’s sovereign assets.

The confrontation between the United States and Venezuela escalated this year, when on 23 January, speaker of the opposition-led National Assembly Juan Guaido declared himself Venezuela's interim president, while the United States, as well as its allies around the world, immediately recognized him.

India Concerned Over US Sanctions Against Iran

Sanjiv Singh told Sputnik on the sidelines of the CERAWeek conference in Houston that Indian Oil Corporation is worried about Washington’s Iran sanctions since the company has been purchasing the Iranian oil.

“Definitely […] Because [sanctions] impact the Iranian crude which they are able to export and which we are able to import from Iran because we had been importing oil from Iran”, Singh said.

China, France, Germany, Iran, Russia, the United Kingdom, and the European Union — the other signatories to the Iran nuclear deal — slammed Washington's withdrawal from the agreement and the reinstatement of sanctions, saying it threatened not only Iran but also countries and companies that continued to do business with Tehran.