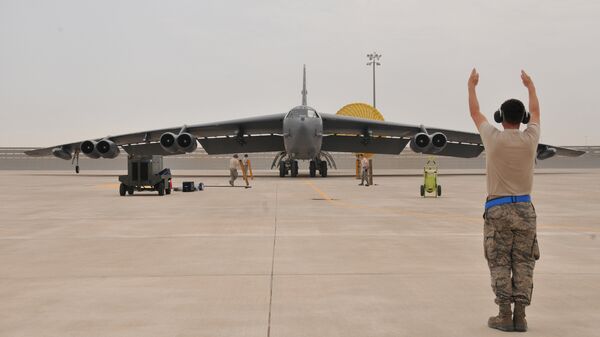 © REUTERS / U.S. Air Force/Tech. Sgt. Terrica Y. Jones
Subscribe
International
India
Africa
WASHINGTON (Sputnik) - Acting US Secretary of Defence Patrick Shanahan met with Qatar Defence Minister Khalid Al Attiyah to reaffirm an alliance with the Persian Gulf nation that hosts the Al Udeid Air Base, the US Department of State said in a readout of the meeting on Tuesday.

"The leaders discussed a broad range of defence and security issues, including Qatari support to the NATO mission in Afghanistan and improvements to Al Udeid Air Base", the readout stated.

US Secretary of State Mike Pompeo said in January that he had signed a memorandum of understanding with Qatar to expand US presence at Al Udeid air base southwest of Doha.

According to Pompeo, the base is home to 13,000 US coalition personnel engaged in battling the Daesh terrorist group in Syria and Iraq.

Top US Universities Get Millions of Dollars From Qatar, Hide This Fact - Reports
Moreover, the base — the largest military facility used by US forces in the Gulf region — is considered crucial for US anti-terror campaigns in Syria, Iraq and Afghanistan. In addition, the military base is home to the US Air Force Central Command (AFCENT) and serves as major communications and operational center for the coalition.

A coalition of a dozen Muslim nations led by Saudi Arabia severed diplomatic ties with Qatar in June 2017, and imposed a de facto commercial blockade over charges that Qatar supports terrorist groups.

The United Arab Emirates, Bahrain, Egypt, the Maldives, Mauritania, Senegal, Djibouti, the Comoros, Jordan, as well as internationally recognized governments in Libya and Yemen have joined the Saudi-led boycott, according to published reports.