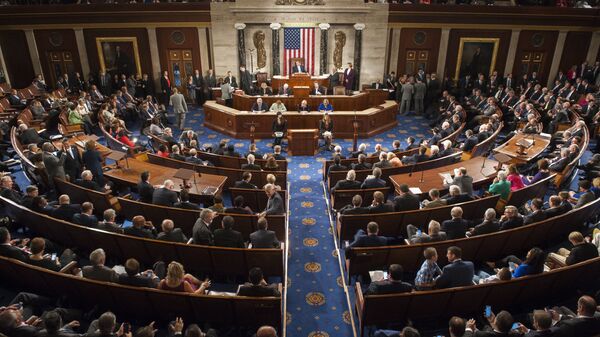 The US House of Representatives passed three bills and one resolution targeting Russia and Russian President Vladimir Putin personally, The Hill reported Tuesday.

The resolution — called "Calling for accountability and justice for the assassination of Boris Nemtsov" — calls the Russian president and government accountable for what US lawmakers consider a poor investigation of the murder of Russian politician Boris Nemtsov.

"It's been four years since his death, but there's been no proper investigation of his assassination and the cover-up and zero accountability for those responsible — that's certainly an outrage," House Foreign Affairs Committee Chairman Eliot Engel (D-NY) said in a floor speech ahead of the vote. "This resolution condemns the Kremlin's systematic targeting of its political opponents and calls on the administration to impose sanctions on those responsible for Nemtsov's murder and cover-up."

Asia
Beijing Hopes US to Abandon Ideas About 'Zero-Sum Game' Between China, Russia
Nemtsov was a governor, federal minister and lawmaker during the Boris Yeltsin administration. He mostly faded away after 2000, and was considered a minor opposition figure. However, he became an icon after his unexpected assassination in 2015. Although five Russian nationals have been charged with the crime, US House lawmakers claim there are other people responsible for Nemtsov's death, and that Putin and the Russian government are covering up the facts of the case.

The second bill — Vladimir Putin Transparency Act — guides the US intelligence community to expose "key networks" that the Russian leadership allegedly uses as a mechanism of strengthening political control and weakening democratic states.

The third bill — Keeping Russian Entrapments Minimal and Limiting Intelligence Networks Act, or KREMLIN Act for short — would require the US director of National Intelligence to submit three different assessments on what bad things Russia could potentially do to US and NATO countries: one each to provide information on potential Russian action against NATO members; potential Russian responses to the expanded role of the US and NATO countries in eastern Europe; and potential areas of weakness the Russian government could attempt to capitalize on, according to The Hill's report.

Washington is Preparing Sanctions Against Nord Stream 2 – Report
The series of bills appears to be another attempt to fan the flames of antagonism between Washington and Moscow — something US lawmakers have been trying to do for years now. Back in 2017, the House passed a bill giving Congress the power to block any effort by the White House to weaken sanctions on Russia.

According to CNN report at the time, the bill was a "direct challenge to President Donald Trump's authority."

Earlier this week, US State Secretary Mike Pompeo accused Russia of being responsible for creating political and humanitarian crisis in Venezuela, while the US supports non-legitimate leader Juan Guaido as interim president against Nicolas Maduro, the elected president.

Critics of Trump have accused of him "not being tough on Russia," as if being tough on Russia is by itself a defining trait of a good US president. It should be noted that the Trump administration has imposed additional sanctions against Russia in recent years. Earlier this week, Trump reportedly demanded Germany to drop its energy projects with Russia, including the Nord Stream 2, a major gas pipeline project.