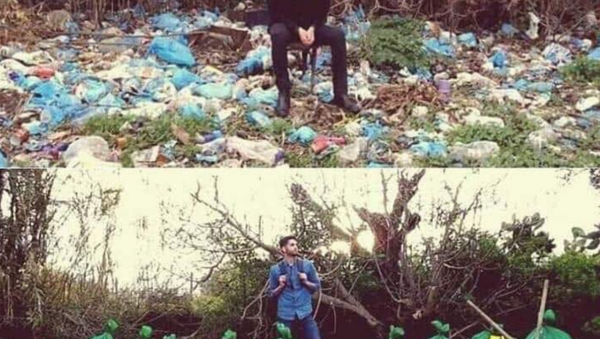 Viral hashtags are nothing new, but the latest one gaining traction online, the “#trashtag challenge,” sure is less disturbing than the condom snorting challenge that made headlines last year. Instead of sucking up condoms, people are instead taking it upon themselves to clean up littered areas and share pictures of their progress online.

The challenge, which first started back in 2015, regained popularity this month after Facebook user Byron Román shared a photo on March 5 with the caption, "Here is a new #challenge for all you bored teens. Take a photo of an area that needs some cleaning or maintenance, then take a photo after you have done something about it, and post it. Here are the people doing it #BasuraChallenge #trashtag Challenge, join the cause. #BasuraChallengeAZ." "Basura" is the Spanish word for trash.

The post includes a "before" image of a man standing in a wooded area filled with trash and an "after" image of the same man with the trash all bagged up. The post has been shared more than 300,000 times since it went up.

​"Last week I posted a photo of young man that had cleaned up an area… I didn't start it, but I am glad my post reached every corner of the world. Go to that hashtag and take it from there. Would be better if we didn't mess things up in the first place, but that's another conversation," Román wrote in a Facebook post Monday.

​The hashtag appears to have been first launched in 2015 by outdoor equipment company UCO Gear.

​In an October 6, 2015, press release, the company wrote, "To keep nature beautiful for everyone to enjoy for decades to come, UCO has launched the UCO #TrashTag Project."

​"The project is a movement that encourages fans and the general public to commit to picking up after ourselves and one another in the wilderness. UCO has pledged a collective goal of picking up 10,000 pieces of trash by October 2016," the post adds.

​The challenge was first conceived by Steven Reinhold, a UCO people ambassador at the time.

​"Me and a buddy of mine were out on a road trip in California, and a receipt blew out of a window," Reinhold is quoted as saying by multiple news sources at the time. "We kind of felt bad about it because it was in a really pretty location, so we decided to pick up 100 pieces of trash."