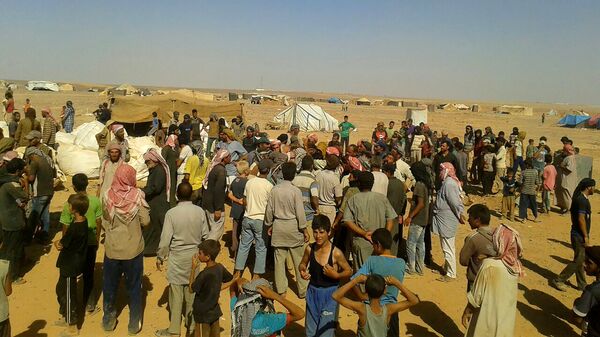 © AP Photo
Subscribe
International
India
Africa
MOSCOW (Sputnik) - There is a threat of outbreaks of dangerous diseases in Syria's Rukban refugee camp, located in the US-controlled zone in Syria's At-Tanf, since landfill and burial sites are situated close to places where refugees reside and drinking water is handed out, the Russian Center for Reconciliation in Syria said on Tuesday.

"There is a trend toward the deterioration of the sanitary-epidemiological situation in the camp. According to satellite photographs, waste dumps and chaotic burial sites on the territory of the camp are situated in immediate proximity to refugees' places of residence and sites where water is being distributed which creates a risk of outbreaks of dangerous deceases," the center's head Col. Gen. Viktor Kupchishin said.

He added that a humanitarian corridor had been established for the return of internally displaced persons from Syria's At-Tanf zone to their permanent places of residence in order to prevent a humanitarian catastrophe in the camp.

The center's head recalled that the Syrian government had undertaken to guarantee the security of temporarily displaced persons and ensure a simplified procedure for the restoration of their documents.

US Blocking Syrian Refugees From Leaving Rukban Camp – Russian Military
The Rukban camp, which is situated in the US-controlled zone surrounding its military base in Al-Tanf, is believed to host around 40,000 refugees, who not only reside in unsanitary conditions but also face spreading diseases and violence.

The Russian Center for Reconciliation in Syria has repeatedly slammed Washington for preventing refugees from leaving the site.