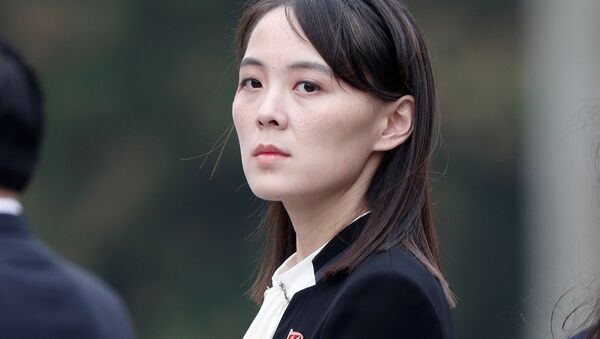 A total of 687 lawmakers have been elected to the country's parliament as a result of the vote, in which the turnout made 99.99 percent, with all the nominees securing 100 percent of the vote in their constituencies, according to the North's official KCNA news agency.

Kim Yo-jong is the deputy chief of the agitation and propaganda department of the Central Committee of the Korean Workers' Party. She attended the opening ceremony of the 2018 winter Olympics in Pyeongchang, and also accompanied her brother during talks with US President Donald Trump in Vietnam at the end of February.

Kim Jong-Un's Sister 'Could Have Been Ideal Person for Talks' With US - Analyst
At the same time, North Korean leader Kim Jong-un has not been included on the list of the new convocation of the Supreme People's Assembly, Yonhap news agency reported. According to the agency, Kim has not been mentioned among the 687 deputies announced via the state radio after Sunday's election. The media concludes that the leader did not run in the election.

Whatever the reason might be, it does not entail Kim losing his power, the news agency added. The South Korean media report hasn't yet been confirmed by neither Pyongyang, not North's state media.