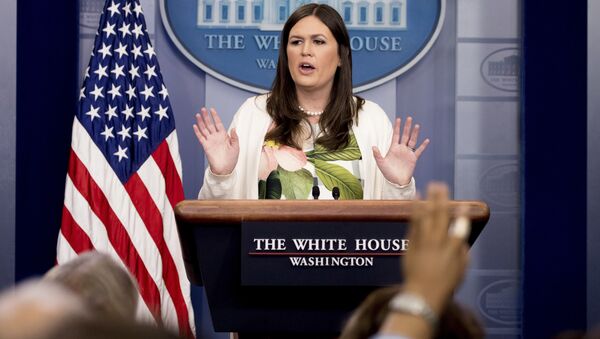 © AP Photo / Andrew Harnik
Subscribe
International
India
Africa
The Democrats seem to have split into two factions over the issue of impeaching US President Donald Trump, and White House staffers have definitely noticed.

The crack in the Democratic Party over the presidential impeachment issue is a sign that House Speaker Nancy Pelosi is losing control over the party, White House Press Secretary Sarah Huckabee Sanders said Tuesday.

"I think Nancy Pelosi is clearly already starting to lose control of her party. I think we're seeing that on a lot of things that have taken place over the last couple of weeks," Sanders said, according to Fox News.

Pelosi has expressed her opposition to the idea of impeaching Trump — an idea favored by certain members of the Democratic Party. According to Pelosi, attempting to initiate an impeachment without compelling evidence of wrongdoing would only split the nation.

"Impeachment is so divisive to the country that unless there's something so compelling and overwhelming and bipartisan, I don't think we should go down that path, because it divides the country," Pelosi told The Washington Post Monday.

Republicans, Democrats at Odds Over White Discrimination in US – Poll
Speaking to Fox News, Sanders said she was "glad [Pelosi] sees what the rest of us see, that there's no reason, no cause for impeachment."

"Nobody wants to see President Trump impeached, other than Democrats in Congress who are failing, who have no other message, and that's because our country is doing better," she said. "I know that this is hard for them to run against in 2020, and I think they've got a very, very hard, uphill battle ahead of them."

Pelosi's position is backed by House Majority Leader Steny Hoyer (D-MD), who said "the distraction would be major," Fox reports.

Rep. Maxine Waters (D-CA) has become notorious for calling for impeachment since the day Trump was elected president. Recently, her calls have been joined by Rep. Rashida Tlaib (D-MI), one of two Muslim women elected to Congress in November, who vowed in January to work to "impeach the motherf**ker."

Trump Riles Up Social Media by Bashing Democrats on Anti-Semitism Resolution
Tlaib is one of three first-year freshmen challenging Pelosi on a number of issues, including the impeachment. Tlaib and her fellow Muslim Democrat Ilhan Omar gained notoriety for endorsing the highly controversial anti-Israeli BDS movement, which is de facto outlawed in 26 US states (with another 10 states considering their own anti-BDS legislation). The third is Alexandria Ocasio-Cortez, who has been blasted by fellow Democrats for leaning too far left, potentially frightening away more moderate voters. Ocasio-Cortez admitted Tuesday she disagrees with Pelosi on the impeachment issue, according to Fox.

The Trump re-election campaign has also made note of the split within the Democrats and suggested the party's 2020 candidates should be separated into two groups based on their position on impeachment.

"Every single Democrat running for president should be made to answer: do they agree with the Speaker who stands in opposition to baseless impeachment charges, or will they risk fracturing the country by bowing to the radical elements in their party who want to disenfranchise the American people and overturn the legitimate and lawful result of the last election?" campaign Press Secretary Kayleigh McEnany said in a statement.