Electric Car Has to Go 433,476 Miles to Become Greener Than Regular Car - Study 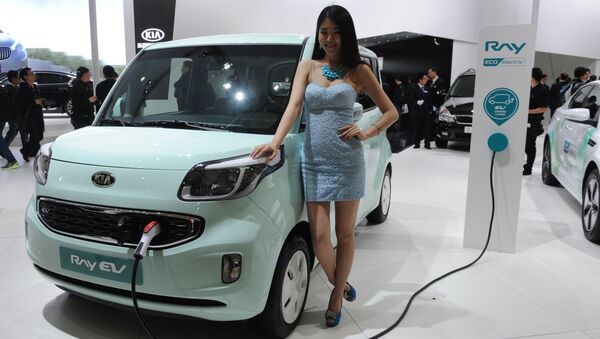 BRUSSELS (Sputnik) - A recent article published by the Belgian RTBF broadcaster suggested that an electric car has to travel 697,612 km, or about 433,476 miles, to become more environment-friendly than a regular vehicle.

The calculations by Damien Ernst, an electromechanical engineering professor at the University of Liege, met with so much criticism online that the broadcaster removed the article last week. Ernst, a recipient of the prestigious Blondel prize, was taken aback by the reaction the article received on social media.

Why So Many Kilometers

A large number of kilometres needs to be contextualized: it refers to an electric car manufactured today and equipped with a battery of 80 kWh. Ernst has pointed out himself that some of the high-end electric cars come with larger batteries. The Audi E-Tron has a 95 kWh battery, the new Tesla Roadster has a 200kWh one, Ernst remarked.

When it comes to what climate goals we should be aiming for, there are a lot of "magic numbers" floating around — 2 degrees, 12 years, 350ppm, net zero emissions, and more. Here's a short thread explaining the scientific basis--or lack thereof--for each.

​The reason for low environmental efficiency is partly the quality of electricity. Europe is currently using both renewables and classic fuel. The manufacture of batteries is not completely green either, as it involves extracting cobalt, which can be polluting.

Once the energy cost of the battery is calculated at 18,696 kilograms (or 41,218 lbs) of CO2, one needs to compare the environmental performances. The demonstration is based on the European average of CO2 emissions per kWh produced; the average European electricity Mix UCTE, multiplied by 100 km: 11 kilograms CO2 per 100 kilometres for an electric car and 13.68 kilograms CO2 per 100 kilometres for a gasoline car.

Taking into account this differential of 2.68 and the energy cost of making a battery, Professor Ernst reaches this incredible 697,612 km number for an electric car to become greener than a ‘classic’ car. The calculation was also based on a vehicle consumption hypothesis.

The researcher stressed that he had taken some of the critical ideas into consideration.

"To calculate the number of kilometres covered whereby an electric car with an 80 kWh battery became 'green,' it was assumed that the total energy required for its manufacture was 296 [gigajoules] GJ. It takes into account the extraction of the raw materials and the manufacture of the battery from these raw materials. There, we can expect the energy needed to go down to 154.88 GJ," Ernst told Sputnik.

The professor added that the study tested several models and "drove with a ‘light foot’ in efficiency mode." One of the conclusions was that the car running on compressed natural gas was a very good option.

Impressive Prospects of Hybrid in China

Professor Ernst is enthusiastic about the hybrid combination of electric and gas.

"The hybrid car running on electricity and natural gas or hydrogen is a winner for the future, especially for China where it should be the best option by far! Our Russian friends have a card to play in a globalized economy that will need more and more of their gas, the cleanest of the fossil fuels," Ernst told Sputnik.

The electric vehicle sector is booming in China, where air quality is an urgent issue, Ernst said. Introducing electric vehicles will help reduce fine particulate nitrogen oxides emissions. However, there may be more CO2 emissions, according to the researcher.

"In China, with an electricity mix that is close to 1 kg [about 2.2 lbs] of CO2 emitted per kWh produced and which, in my opinion, will remain well above 600 grams [1.3 lbs] per kWh for the next 10 years, even the substitution of the petrol-driven vehicles with electric vehicles with a modest battery size of about 40 kWh, may be accompanied by an increase in CO2 emissions," Ernst said.

Given the size of the Chinese market, this might hamper the global reduction of CO2 emissions, the researcher argued.

University of Liege professor Didier Heusdens believes that the shift to the electric car will make sense if decisions are made to adapt to the sector's needs.

"It is possible to manufacture second-generation batteries (better recyclable than the present 50 percent) and produce electricity with renewable energy sources or nuclear energy, that doesn’t emit any CO2," Heusdens told Sputnik.

However, consumers will also need to change their habits, the professor said.

"The consumers will also have to change their habits: rent and/or share a car; install a more powerful electrical terminal at home (90 percent of the recharges are done at home); reload the unused kWh in the house; recharge the car according to a schedule that will define the best time (depending on overall consumption, or on wind and sun availability; accumulate energy in a battery home during the best hours and use it to partly charge the car)," Heusdens said.

The industry is already developing at a fast pace. Half of the French PSA Group (Peugeot-Citroen) car range will be electric or hybrid next year, and the company is planning to make electric versions of 100 percent of their vehicles by 2025.

The views and opinions expressed by the scholars do not necessarily reflect those of Sputnik.