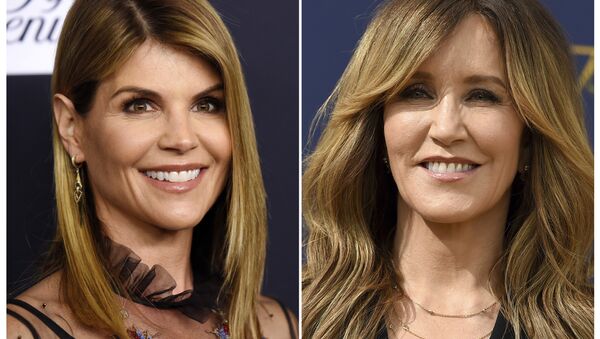 © AP Photo
Subscribe
International
India
Africa
Arrest warrants were issued for actors Lori Loughlin and Felicity Huffman Tuesday as a result of their involvement in a nationwide college admissions cheating scam, according to court documents unsealed in Boston.

Loughlin and Huffman, who starred in the hit US TV series "Full House" and "Desperate Housewives," respectively, may bring their acting chops to court after the FBI's Operation Varsity Blues uncovered what they call "the largest college admissions scam ever prosecuted by the Department of Justice."

Boston court records revealed the FBI is accusing at least 50 individuals of not only "bribing college entrance exam administrators" and "varsity coaches" to lie about their children's proficiency or participation in sports or other activities, but also of using the "façade of a charitable organization" to hide the "nature and source of bribe payments" that are said to have totaled approximately $25 million between 2011 and 2018.

Documents say Huffman, a mother of two, made a $15,000 payment to have her oldest daughter's SAT scores doctored, but clearly played favorites, as she decided to not engage in the same fraudulent activity for her youngest child's education (ouch).

Loughlin and her husband, fashion designer Mossimo Giannulli, chose to be a little more elaborate in purporting their child as a perfect student. The filing says the couple paid half a million dollars in exchange for their two daughters to be listed as rowing recruits for the University of Southern California crew team, "despite the fact that they did not participate in crew…."

Shocked and appalled that the TV stars have been exposed for sinking so low, netizens are turning the otherwise enraging event into something hilarious. Unfortunately for the actors, their extensive reels are also proving to be their ultimate undoing on social media.

Lori Loughlin paid $500k to get her daughter into USC. Not to be a dick but how stupid is her daughter?

we been knew Aunt Becky pic.twitter.com/80j11vzvhY

I had to go and check Instagram to make sure this photo of Aunt Becky’s kid was real and it is very real. The unmitigated gall… pic.twitter.com/Gx1nYMYBSS

Donald Trump Jr trying to dunk on Felicity Huffman because she’s a parent who abused her wealth to give her kids massively unfair advantages is my entry for the Lack of Self Awareness Office Pool. pic.twitter.com/gHH3Dvpt2E

Though Huffman was already arrested Tuesday morning in Los Angeles, Loughlin's warrant still remains active, as she is out of the country, according to US Attorney Andrew Lelling.

Those arrested are expected to appear in federal court later today.