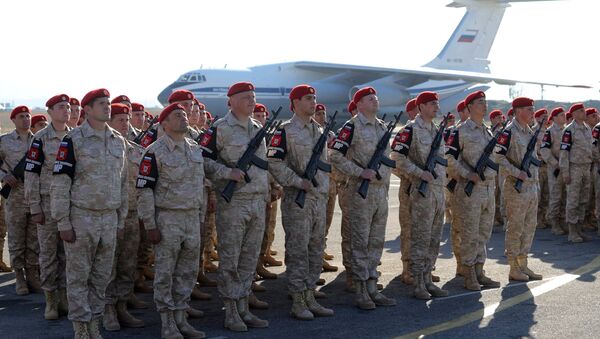 MOSCOW (Sputnik) - The Russian army can now fight in the remotest parts of the world, although just six years ago it did not have such an opportunity, Russian Defense Minister Sergei Shoigu said on Monday, speaking at an extended meeting of the Russian lower house Defense Committee.

Shoigu explained how the situation faced by the country's Armed Forces in the beginning of the 2010s was improved. He also reported how many weapons the Russian army had tested in Syria, and how the missile capabilities of the Russian Armed Forces have increased. Shoigu’s speech focused on Russia’s defense readiness and related legal issues. The figures that Shoigu mentioned were related to the period after 2012, after he came to head the Russian Defense Ministry.

All military units of the Russian Armed Forces are now combat-ready, Shoigu said. He recalled that this was not always the case.

"In 2012, the composition of the stand-by forces included only 16 formations. Brigades were formed instead of divisions and were staffed 50-75 percent. The timing for bringing them to combat readiness in one hour was not reached", the head of the military department said.

Shoigu highlighted the opportunity for the Russian army to participate in operations in remote regions of the world.

Suicide Bomber Attacks US-Kurdish Patrol in Syria's Manbij - Reports
"In 2012, the use of the Armed Forces in a remote region was out of the question. There was no one to fight and no weapons. At that time, the training to perform tactical operations was carried out with low intensity", he said.

According to Shoigu, as a result of the disbandment of the Main Directorate of Combat Training at that time, the unified leadership of the combat training process was lost. Since 2015, Russian troops have been taking part in operations against terrorist groups in Syria.

"In total, we have tested 316 types of modern weapons in Syria", the minister said.

Coalition Used Banned White Phosphorus in Strike on Syria's Bagouz - Reports
Thanks to the Syrian experience, Russian troops received new light missiles of increased range (up to 15 kilometers) for helicopters. According to the minister, such missiles can be used without entering the kill zone of the enemy’s air defense.

Shoigu said that Russia had increased the number of its high-precision cruise missiles 30-fold over the six years, and the number of their carriers had increased more than 12-fold. According to the information provided by the minister, in 2012 there had practically been no long-range precision weapons in the Armed Forces.

According to the minister, three units of unmanned aircraft in the Armed Forces were equipped with 91 outdated systems with unmanned aerial vehicles from the 1970s. "Their characteristics did not allow them to perform tasks in modern combat", he stated.

The Russian army has received new opportunities for exploration and destruction of enemy targets with the help of drones, in the development of which a "qualitative leap forward" was made, Shoigu said.

"So, thanks to the laser illumination from the drones, it was possible to give a second life to the previously unclaimed high-precision explosive artillery shells Krasnopol. As a result, their consumption decreased – no more than two shells per one target, and the range of the use increased", the minister added.

The Russian army in 2019 will for the first time receive reconnaissance-shock drones, Shoigu said.

The minister noted that over the six years, 38 military units had been formed, which were armed with more than 2,000 modern unmanned aerial vehicles.

Shoigu also told how the army had managed to significantly reduce the number of weapon failures over six years. "Military representative offices have been revived in their modern form. Thus, the quality control of products by defense companies has been strengthened. The number of failures of new weapons and equipment has been reduced 2.7 times", the minister said.

He recalled that by the beginning of the 2010s, the staff of military representative offices had been greatly reduced, with their functions being partially transferred of the producers' own departments. However, their number began to increase again in 2013. In addition, Shoigu criticized the army's previous outsourcing system.

"In fact, outsourcing developed only where it brought a good income and there were no obligations", he added. Today, the situation has changed dramatically, Shoigu noted.

US Commanders Once Again Warn Syria, Iraq at Risk of Daesh Resurgence
The work of the restored full-time military repair agencies saves about 1 billion rubles a year, the food control system in army kitchens allowed to save 3 billion rubles, equipping all military towns with utilities meters saved 5.3 billion rubles, he recalled.

"The repair shops restored at the arsenals in the current year alone brought back to operation 550,000 missiles and ammunition units. Their purchase would have cost the budget 63 billion rubles", the minister noted.

Since 2012, the number of Russians negatively assessing the activities of the Russian Armed Forces has decreased to 7 percent from 31 percent, Shoigu said.

"Opinion polls conducted over the past 2-3 years show that about 90 percent of the country's population trusts the Russian army", he said.

The changing attitude also affected the growth in the number of contract servicemen in the Armed Forces. Since 2012, their number more than doubled almost to 400,000. According to Shoigu, now in each regiment and brigade, two battalions are staffed with contract servicemen, and the third with conscripts.

"At the same time, conscripts are not involved in the performance of combat missions", the general explained. A total of 136 battalion tactical groups in the Russian army are staffed by contract soldiers exclusively, Shoigu noted.