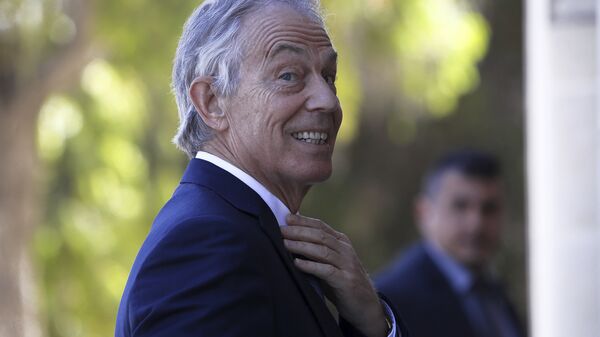 © AP Photo / Petros Karadjias
Subscribe
International
India
Africa
During his time as Prime Minister (1997-2007), Mr Blair presided over a wave of pro-Europe policies, which included devising ways to shift the British currency from the Pound to the Euro, although he admitted in 1999 that the proposal would likely fail in a referendum.

Former UK Prime Minister, Tony Blair, has been secretly advising French President Emmanual Macron on how to stymie the UK's attempts to leave the European Union (EU), the Telegraph has revealed.

Mr Blair apparently shared his beliefs with officials in Paris that if the EU continues to refuse concessions then eventually the British parliament will relent and accept a customs union arrangement that would keep London tethered to Brussels, or, that they may even cancel Brexit altogether.

Just when you thought he couldn't sink any lower, it emerges that Tony Blair has been briefing Emmanuel Macron on how to force Britain to stay in the EU: https://t.co/D3LQFJaMPk #Brexit

The Telegraph says that it has spoken to sources in Paris who confirm that Mr Blair has been advising Mr Macron on tactics to thwart the Brexit process, reportedly telling the French leader to "hold firm" and wait for the turbulence to pass which will eventuate with Britain remaining in the EU.

Eurosceptic Conservative MP Peter Bone was quoted by the Telegraph as saying that, "it is totally unacceptable for a former prime minister to go around the heads of European countries and undermine the Government's position. I'm not sure we could find another time in modern history when this has happened."

"Tony Blair has to realise he has had his time as prime minister and I'm surprised and disappointed he has done this. I doubt he would have liked it if his predecessors had done this to him," Mr Bone reportedly added.

Can you imagine President Obama advising the Chinese Premier about US trade talks?

It would come as no surprise if #TonyBlair was advising @EmmanuelMacron two huge egos whom despise #Brexit.

​The news comes as Prime Minister Theresa May struggles to get the derailed Brexit process on track. Miss may is said to be considering pulling her second vote — after canceling the first — on her Brexit deal as she faces the grim prospect of another overwhelming parliamentary defeat.

Miss May has, over the past few weeks, continued to tell parliament that it would be given a chance to hold a "meaningful vote" on her Brexit blueprint, but it now looks possible that she'll be postponing that pledge due to slow progress in talks with the EU. The UK and EU held negotiations in Brussels over the weekend, with May trying and failing to win concessions on a number of issues, namely the fate of the Irish backstop.

A number of MPs from Miss may's party have been quoted as expressing their bewilderment about what happens next. Mark Francois, who belongs to the Eurosceptic parliamentary European Research Group, has been quoted by the BBC as saying that unless "something amazing" happens, then the government is likely to face an overwhelming defeat over its Brexit deal as happened back in January by an unprecedented 230 votes.