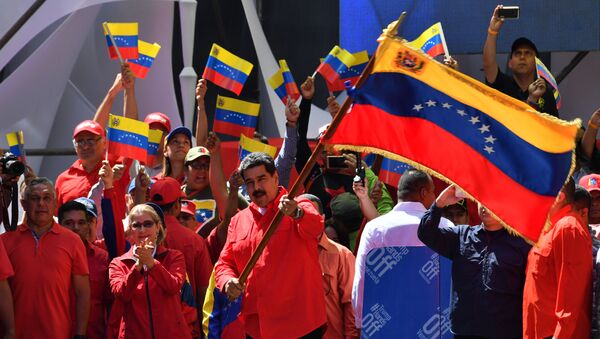 © AFP 2023 / Yuri CORTEZ
Subscribe
International
India
Africa
China's Foreign Minister Wang Yi has issued a stern warning against interfering in Venezuela's internal affairs and imposing more sanctions. Speaking in Beijing, Wang Yi said that external interference and sanctions will only exacerbate the tense situation and allow the law of the jungle to once again run amok.

This comes after Venezuelan President Nicolas Maduro said that an electric energy war, declared by the United States, will not succeed. Earlier the same day, local media reported that a blackout had hit 21 out of 23 of Venezuela's states, affecting millions of Venezuelans in what the national electricity supplier described as "sabotage" at a major hydroelectric power plant.

Venezuela's self-proclaimed president Juan Guaido said the incident was a matter of "chaos, concern and anger" and "evidence of the usurper's inefficiency", adding that light would return once Maduro is removed from power.

His statements were echoed by US Secretary of State Mike Pompeo, who tweeted that power shortages and starvation are the results of the Maduro regime's incompetence. He tweeted "No food. No medicine. Now, no power. Next, no Maduro".

Sputnik has discussed the latest developments in Venezuela with Frederick B. Mills, Professor of Philosophy, Bowie State University.

US Doesn't Plan to Military Intervene Venezuela - Abrams
Sputnik: What can you tell us about the current White House policy then towards Venezuela, what political, economic goals is it trying to achieve there, I think we've got a general overview of what's going on but perhaps it would be interesting to get a professor of philosophy's point of view in America, what can you share with us?

Frederick B. Mills: A lot of the analysis on Venezuela focuses on the economic interests of the United States and the resources, the energy-rich country and minerals etc., but really the political dimension is equally important because when Chavez was elected in 1998 really there began an epic in Latin America lead by Venezuela which had basically three pillars.

One was to recognise a multipolar world and to diversify trading relationships with the rest of the world. Second, was to promote regional integration and independence which challenged US hegemony in the region. And third, is what Chavez called paying the social debt, which meant a transfer of a great deal of financial resources to social investment.

So these three things really posed an alternative and a challenge to the goal of imposing neoliberal regimes throughout the hemisphere. So it's not just an economic interest, but a political, regional, and geopolitical interest.

Sputnik: Now how big a deal is Venezuela for most Americans? Is it making front-page headlines in the US? My colleagues just asked me this question and I've been to America a couple of times, it's an interesting question in itself. What does the average American, in say Portland, are they actually talking about Venezuela? Is it the main cause of communication, the discussion around the dinner table in restaurants in America, what can you share with us?

US and Opposition Want to Unleash an 'Oil War' to Invade Venezuela - Maduro
Frederick B. Mills: Venezuela had been on a back burner despite the attempt at regime change that had begun since Chavez was elected in December 1998. But now it is a very prominent issue and there seems to have been the beginning of a breakthrough of the dominant media narrative that the US was on the mission to save Venezuela from a "terrible dictatorship".

And I think it's thanks to the reporting of independent journalists and alternative media like the Gray Zone Project, Venezuelan analysis and other media, that now the anti-war movement has basically integrated the demands against US intervention in Venezuela into its programme. And so there's going to be national demonstrations, for example, on the 16th and on 30th of March. So it's gone from being an obscure issue to really the front page and to a great deal of conversation in the United States.

Sputnik: Venezuela has an opposition-controlled National Assembly and a visible opposition, so with that in mind, in your view is Nicolas Maduro really such a hardline politician as he's often portrayed in the media And is it possible to run the country effectively under the sanctions imposed on him? That's the question, I had an interesting conversation with an expert yesterday, I had spoken to a Russian political analyst about what happened with Guaido leaving the country after being told by the judiciary that he was not allowed to leave the country. He didn't comply with that order, he came back, and I asked two questions to experts is that a sign of weakness or strength?

And the analyst here said that it's definitely showing weakness to the Americans and the American expert said it was actually showing strength and saying, "Look, we're not such a dictatorship, after all, we've let him go, he has come back and we're being very fair in terms of his freedom of movement". How do you see it from your point of view?

'Useful to Keep Them Nervous': LISTEN as Top Trump Aide Blabs US Venezuela Plans
Frederick B. Mills: The principal problem faced by Guaido and his supporters is that democratic legitimacy can't be built by coercion from outside the nation. A democratic consensus can only be built from constituent power from inside the nation and this is why dialogue is the preferred method of resolving the political polarisation in the country, at least for the majority of the United Nations and for the majority of Venezuelans.

The polls in 2017 and the most recent ones this year still show the majority of Venezuelans don't want a military intervention in the country and would prefer dialogue to increased polarisation, sanctions, sabotage, violence. This simply isn't a feasible path forward. And as far as the sanctions… and today we see the electric grid is down in most of Venezuela, the subway is not running, one out of four major telephone companies isn't operational, this still hasn't provoked any serious ruptures in the military.

It hasn't brought Venezuela, so to speak, to its knees. So I think you have a situation where the only feasible path forward, where a democratic, if not consensus, at least coexistence and accords on certain national issues can only come about through dialogue.

Views and opinions, expressed in the article are those of Frederick B. Mills and do not necessarily reflect those of Sputnik.