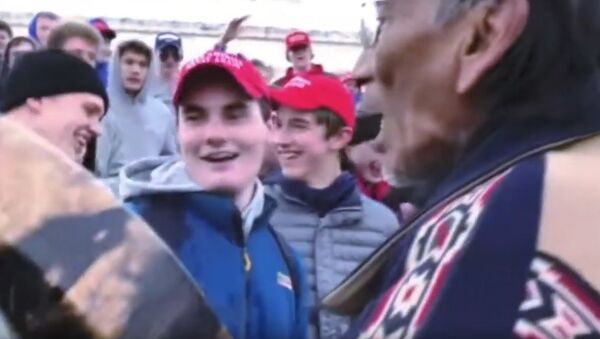 CNN is likely to be hit with a massive lawsuit worth more than $250 million over alleged “vicious” and “direct attacks” on Covington Catholic High School student Nick Sandmann, according to his lawyer.

L. Lin Wood, who legally represents Sandmann, told Fox News that they decided to sue CNN because it was “more vicious in its direct attacks on Nicholas” than the Washington Post.

“They really went after Nicholas with the idea that he was part of a mob that was attacking the Black Hebrew Israelites, yelling racist slurs at the Black Hebrew Israelites. Totally false.  […] Nicholas Sandmann did absolutely nothing wrong. He was, as I've said to others, he was the only adult in the room. But you have a situation where CNN couldn't resist the idea that here's a guy with a young boy, that Make America Great Again cap on. So they go after him,” he told Fox News host Mark Levin.

Wood noted that CNN was online in the prime-time evening hours and they were “going after this young boy” for two days, instead of looking for further evidence. He also detailed the timing of the suit, saying it will be issued “Monday, Tuesday at the latest.”

“I've got some young, smart lawyers that are working as hard as we can," he told Levin. "Double-checking, and listen, when we file complaints, we've investigated it because we want to get it right. Maybe CNN can learn from that."

Native American Elder in Viral 'MAGA Kids' Confrontation Never Served Overseas
Earlier Wood filed suit against The Washington Post, calling for $250 million in compensatory and punitive damages over the paper's coverage of the confrontation. However, he told Fox News, the claim against CNN is likely to be even higher.

“I expect because of the way they went after Nicholas so viciously, that the claim for his reputational damage will be higher than it was against The Washington Post,” the veteran attorney said.

Sandmann, a junior at Covington Catholic High School, became a target for outrage after a video of him standing face-to-face with a Native American man, Nathan Phillips, while wearing a red Make America Great Again hat surfaced back in January. The group of students was initially accused of initiating the confrontation, but other videos and the students' own statements showed that they were verbally accosted by a group of street preachers who were shouting insults at them and the Native Americans. Both Sandmann and Phillips have said since then that they were trying to calm the situation down.