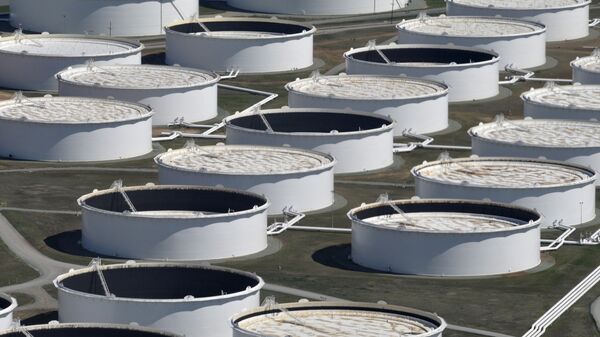 © REUTERS / Nick Oxford/File Photo
Subscribe
International
India
Africa
Last week, the Department of Energy announced plans to sell off up to 6 million barrels of crude stocks from the US' Strategic Petroleum Reserve, with deliveries expected to take place between April and May, just as Washington's 'temporary waivers' on Iranian oil to major importers, including China, India and Japan, are expected to expire.

The crude sell-off, expected to drain oil from three sites in Texas and Louisiana, was announced on 28 February, with the DoE taking bids on the crude stocks until 13 March.

According to geo-economics analyst and Sputnik contributor Maxim Rubchenko, the timing of the sell-off wasn't a coincidence, with the US' temporary waivers on Iranian crude oil sales to major importers including China, India, Turkey, Italy, Japan, South Korea, Greece, and Taiwan expected to expire on 4 May, just as the reserve US oil stocks will be entering the market.

With President Trump repeatedly criticising OPEC for oil prices being higher than he would like, and Iran enjoying daily oil exports of 1.1-1.3 million bpd in January and February despite earlier US promises to bring Iranian crude sales abroad down "to zero," the DoE's move seems to be aimed at preventing a global oil price hike when US waivers on Iranian crude expire, Rubchenko argues.

However, the analyst says that, notwithstanding US and, more recently, Israeli, threats, to combat "Iranian oil smuggling" once the sanctions waivers are withdrawn, there seems to be little chance of Iranian exports actually suffering a substantial decline.

"And this is largely due to Washington's own policy," the observer noted, citing the president's recent policy moves.

Trump Says Washington to Terminate India, Turkey Duty-Free Status
Last week, for example, Trump announced that the US would be terminating its preferential trade status with Turkey and India. Trump justified the decision by citing Turkey's growing wealth, as well as India's alleged unfair trade practices against US companies seeking access to Indian markets. In any case, with New Delhi and Ankara being the largest and fifth largest buyers of Iranian oil in 2018, Washington's action has effectively given both countries a very strong argument against reducing their trade cooperation with Tehran.

Officials in China, the second-largest buyer of Iranian oil, have already indicated repeatedly that they would not renege on Iranian crude in the face of US pressure, with the ongoing multi-billion dollar trade war between Washington and Beijing, as well as the scandal over US's criminal case against an executive of Chinese telecommunications giant Huawei, making the prospect of Chinese backing for the US's anti-Iranian efforts even less likely.

Pence Lashes Out at EU for ‘Undermining’ Iran Sanctions, Buying Arms From East
As Rubchenko points out, even the European Union, the US ally which regularly goes along with even the most adventurous foreign policy initiatives by Washington, has showed resistance and restraint when it comes to Iran. In January, France, Germany and the UK announced the creation of a new payment-processing system known as INSTEX to keep the Joint Comprehensive Plan of Action nuclear deal alive, with the system allowing European companies to do business with Iran without running the risk of being slapped with US secondary sanctions. When it comes to oil sales, the system includes measures to bypass direct purchases and sales in favour of a more complicated system in which payments are made indirectly through barter.

Accordingly, "even if Iranian exports do decline in May, this drop will be insignificant," Rubchenko emphasised.

Selloff May Backfire on US Shale

This, in turn, means that the dumping of the 6 million barrels worth of US crude reserves on the world market is only likely to result in a glut on the local markets, with prices dropping accordingly and harming the already shaky US shale oil industry even further.

US Shale Oil Producers Reduce 2019 Investment Plans Amid Low Prices
In late 2017, market advisory firm Evercore ISI calculated that energy companies had spent a whopping $280 billion more than they generated from their shale investments since 2007.

In January, shale giant Hess Corp CEO John Hess told World Economic Forum attendees in Davos that oil prices of less than $60 a barrel for WTI would be harmful for the sector and lead to reduced investment. As of Friday trading, WTI prices stood at just over $56.