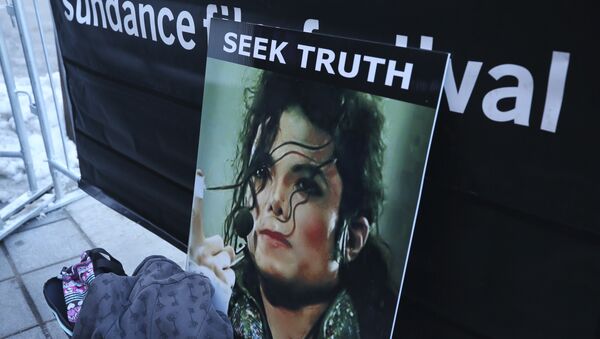 Leaving Neverland, an explosive new HBO documentary on child sexual abuse accusations against Michael Jackson, cast doubts regarding the moral integrity of the late 'king of pop', but a host of fans leapt to the defence of their idol, saying that the accusers had financial motives.

Jackson was first accused of sexual abuse by the family of a 13-year-old boy in 1993, but the case was settled outside of court without any criminal charges. In 2005, he was found not guilty on charges of molestation of another 13-year-old.

The new documentary details claims brought by another two alleged victims, now adult men, who say the late King of Pop molested them when they were young boys.

One of them, Australian-born choreographer Wade Robson, 36, already testified at Jackson's trial in 2005, which was connected with similar claims made by two other men.

Robson, who met Jackson through a dance contest, said that he used to sleep in his room, but that the pop star had never been sexual with him — a revelation that contributed to MJ's acquittal on all charges.

However, he backtracked on his testimony in 2013, years after the singer died, claiming that he had been sexually abused by Michael Jackson from the age of seven to 14.

The other alleged victim, American James Safechuck, 40, featured in a Pepsi commercial starring Jackson when he was a child; he also reported cases of sexual abuse by the singer dating back to the 1990s.

Both allege that Jackson told them to keep it secret.

Plenty of fans, however, believe that these accusations are false. "Anyone who believes these ridiculous claims about Michael Jackson may as well believe that the Earth is flat and Hitler was a peaceful man who loved Jews," Danny Oliver, a top international MJ tribute artiste, told Sputnik.

Oliver, who claims to have known Michael Jackson for over 10 years and visited Neverland, insists that Jackson had never invited anyone into his bedroom.

Oliver also mentions what he believes to be inconsistencies in HBO's story, which he described as "one-sided and emotionally manipulative".

For instance, he points out, Leaving Neverland director Dan Reed said that Safechuck and Robson had never met each other until 2019, despite Robson testifying under oath that he and Safechuck had become acquainted in 2014.

In another example, he cited Safechuck as saying that he had not equated his relation with Jackson with sexual abuse until 2013, yet in the film Safechuck says he told his mother as early as 2005 that Jackson had abused him.

Oliver claims that the stories told by the accusers at the centre of Leaving Neverland have been "directly lifted" from the pages of a book by Victor Guitierrez, an associate of the North American Man/Boy Love Association paedophilia advocacy group, who was ordered by the court to pay Jackson $2.7 million in damages.

The lurid documentary has caused a public backlash, with some broadcasters refusing to air Jackson's songs.

"But we can't just stand by while this public lynching goes on… Michael is not here to defend himself, otherwise these allegations would not have been made."