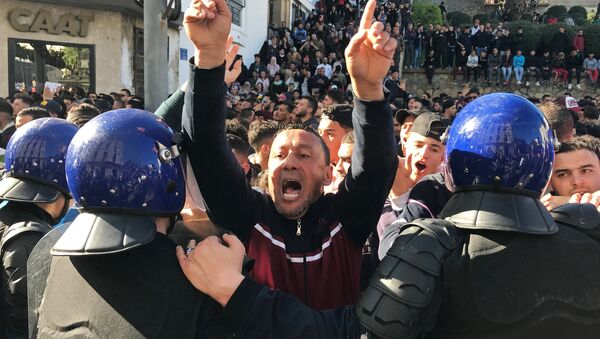 CAIRO (Sputnik) - The National Museum of Antiquities and Islamic Art in the Algerian capital was attacked, and part of its exhibition was looted on Friday during mass anti-government rallies in the city, the country's Culture Ministry said on Saturday.

"After the administration building was set on fire and documentation and lists were destroyed, some of the exhibits were stolen," the ministry said in a statement, as quoted by the Radio Algeria broadcaster.

Civil defence forces managed to put out the fire quickly and prevent it from spreading to the rest of the museum's premises, it added.

Law enforcement agencies claim that the protesters were joined by people, who intended to organise acts of vandalism. According to media reports, about 200 offenders were detained during the rallies.

#Algeria's 🇩🇿 oldest museum, home to some of the country's most valuable art, was vandalized during protests against President Abdelaziz #Bouteflika's bid for a fifth term, the culture ministry
#لا_للعهدة_الخامسة #حراك_8_مارسhttps://t.co/l3NKwFJtdc pic.twitter.com/CnPAb08myo

​This comes after on Thursday the protests flared up as the Constitutional Council of Algeria refused to consider lawyers' appeal against the ailing President Abdelaziz Bouteflika. Algerians have been frustrated by Bouteflika's announcement last month that he would run in the April 18 presidential election, despite his pledge to hold a snap vote in case of his re-election.

In general, the rallies proceeded peacefully, but in the evening there were riots and clashes with the police.

Reacting to the rallies, Bouteflika warned Algerians against the risk of "chaos" resulting from protests that are driven by 'any treacherous internal or foreign group.'