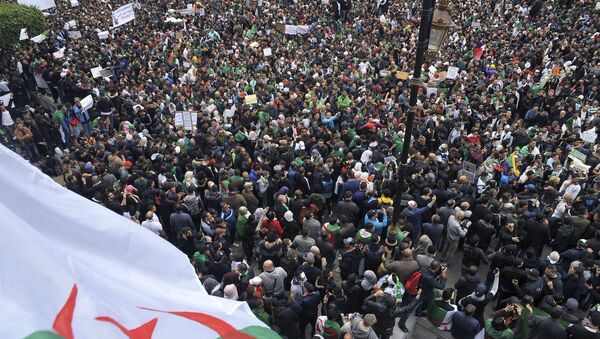 MOSCOW (Sputnik) - As many as 195 protesters were detained during nationwide protests in Algeria on Friday against President Abdelaziz Bouteflika's bid for a fifth term, local media said.

The Directorate General for National Security said 112 law enforcement officers were injured, according to the TSA news website. In the capital Algiers, insignificant damage to property was reported.

Africa
Hundreds of Lawyers Protest in Algeria Against Bouteflika's Candidacy - Reports
A record number of protesters took to the streets this Friday, which marked the third week of demonstrations. A million reportedly marched through Algiers.

Algerians have been angered by Bouteflika's announcement last month he would run in the April 18 presidential election, despite his pledge to hold a snap vote in case of his re-election.

The 82-year-old has ruled the North African country for two decades. He has been rarely seen in public since a stroke in 2013 left him paralyzed and wheelchair-bound.