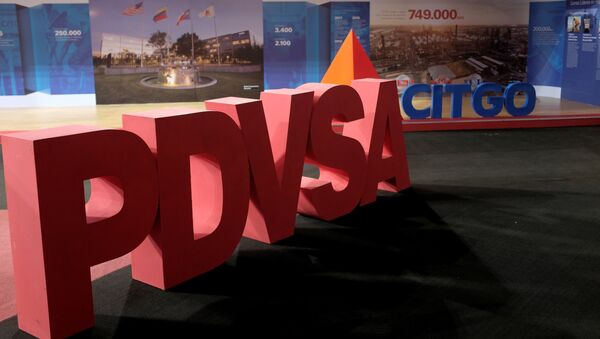 © REUTERS / Marco Bello
Subscribe
On January 28, the United States blocked $7 billion in PDVSA assets in its jurisdiction and imposed a ban on deals with the entity as part of efforts to facilitate a power transfer in Venezuela.

The United States has extended the deadline for investors to cut ties with Venezuela's Petroleos de Venezuela, S.A. (PDVSA) until May 10, the Treasury Department's Office of Foreign Assets Control (OFAC) said in a notice on its website on Friday.

"OFAC is extending the expiration date of provisions relating to the wind down of certain financial contracts or other agreements involving, or linked to, the bonds listed on the Annex to General License 3D or to certain Petroleos de Venezuela, S.A. securities," the notice said. "This authorization is valid through 12:01 a.m. eastern daylight time, May 10, 2019."

The provisions allow for limited transactions with PDVSA before US sanctions on the Venezuelan oil company come into full effect. Companies that continue to do business with PDVSA after the deadline risk US sanctions. The previous deadline was March 11, 2019.

The United States has imposed numerous rounds of sanctions on Venezuela. In January, Washington blocked $7 billion in assets belonging to PDVSA. Venezuelan President Nicolas Maduro said the restrictions were tantamount to an illegal seizure of the country's sovereign assets.

Venezuela's PDVSA Refutes Reports of Gazprombank Freeze on Company Accounts
Earlier, US Treasury Secretary Steven Mnuchin, emphasized that by blocking PDVSA assets, the United States was preserving the assets of the company in the interests of the people of Venezuela and also protecting its own market. Venezuela has blasted the move as unlawful and accused Washington of seeking to get its hands on Venezuelan oil reserves.

The political crisis in Venezuela escalated in late January, when opposition leader Juan Guaido declared himself to be the country's interim president. Maduro, who was sworn in for his second presidential term earlier that month, qualified Guaido's move as an attempt to stage a coup orchestrated by Washington.

The United States immediately recognized Guaido, and many of its allies followed suit. Russia, China, Mexico, Turkey and a number of other states have voiced their support for the Maduro government as Venezuela’s legitimate authority.

000000
Popular comments
Who on earth can rely on the US of gangsters to observe any laws?
ian
8 March 2019, 23:05 GMT1
000000
This US government is getting dumber by the day. Or is it that the politicians are getting too old and most if not all of them are suffering from a severe Alzheimer on set