As UK Airshow Crash Pilot Cleared, Why Do Secrets of the Cockpit Remain Hidden? 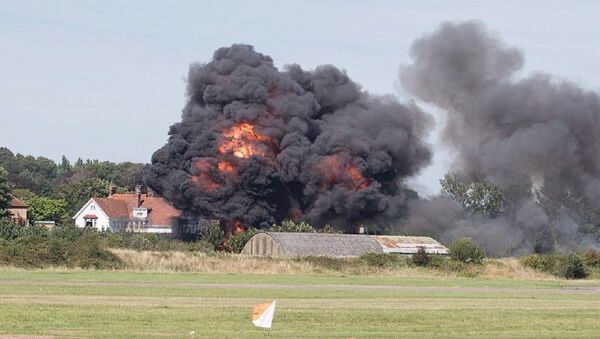 © Photo : YouTube/Universal Media Online
Subscribe
International
India
Africa
In August 2015 a Hawker Hunter jet ploughed into traffic on a main road on the south coast of England during an airshow, killing 11 motorists.

On Friday, 8 March, pilot Andy Hill was acquitted of 11 counts of manslaughter by negligence.

There were gasps and tears from the relatives of the victims who sat in the courtroom at the Old Bailey in central London.

"I am enormously impressed and grateful for the dignified way you have all behaved. I can see that you are upset and you are absolutely entitled to be but despite being upset you have behaved in a way which does you great credit," Mr Justice Edis told the families.

Andy Hill statement outside court following the not guilty verdict- he reads out the names of those who died and says he is very sorry for the part he played in their deaths ⁦@bbcsoutheast⁩ pic.twitter.com/rmv9RjFkur

After the not guilty verdict Hill read out a statement outside court in which he read out the names of all those who died.

"I'm truly sorry for the part I played in their deaths. It is they that I will remember for the rest of my life," Hill, 54, said.

Sending the jury out to deliberate on their verdict earlier in the week Judge Andrew Edis told them they had to focus on "why things went so disastrously wrong. "

But were the jury given all the facts?

Legal argument before the trial at the Old Bailey got under way focused on the question of cockpit confidentiality.

Ever since the introduction of Cockpit Voice Recorder (CVR) technology in the 1970s and 1980s there has been a protocol that the contents will only be used in connection with accident investigations. Pilots are continuously recorded and CVRs store the last two hours of their conversation.

Families of the eleven victims of the Shoreham air show disaster shook their head and wept at the back of the court as pilot Andy Hill was cleared of causing the deaths by gross negligence pic.twitter.com/9l6W3vm8YB

​When there is an accident the first thing investigators will look for is the "black box", which is a catch-all term which refers to both the CVRs and the flight data recorder (FDR), which stores speed, altitude and other data from instruments in the cockpit.

Both the CVR and the FDR are built to withstand g-force, impact and temperatures of over 1,000 degrees Celsius. So both recorders survived the Shoreham airshow accident on 22 August 2015 and played a key part in the Air Accident Investigation Bureau's investigation.

But when it came time for Hill to go on trial in 2019 there was considerable legal argument about whether the contents of the CVR could be released in open court. The British Airline Pilots Association (BALPA) objected and a lawyer representing various media organisations was called in, in an attempt to overturn the decision to keep what went on in Hill's cockpit a secret.

Prosecutors claimed he began his "bent loop" while flying too low and did not use enough thrust, resulting in the jet smashing into queuing traffic on the busy A27 dual carriageway. It is the main road from Brighton to Portsmouth and runs within a few hundred yards of the end of the runway at Shoreham airport, where the airshow was being held.

Hill's lawyer, Karim Khalil QC, said his clients actions were "frankly inconceivable" unless he was "impaired".

NSC has made a £500 donation to The REMF Jacob Schilt Memorial Walk fund http://t.co/bWQQxKAdSH pic.twitter.com/CcfEvhrXbq

​Hill himself said in evidence he must have passed out due to the g-force during the manoeuvre and said he remembered nothing of the accident or even a few days before the crash.

"Attention will now to turn to the inquest where the entirety of the Shoreham Airshow tragedy can be fully examined," said Rebecca Smith, a solicitor who represents 17 people affected by the crash.

The incident had an inevitable chill factor on attendance at airshows.

Earlier this week the world-famous Farnborough International Airshow said it would no longer hold a public weekend after "negative and vitriolic" feedback about displays. The organisers said the Shoreham air crash had "expedited" their decision, but they said there had been a "dwindling number" of spectators last year.

The airshow takes place every other year and the next one is due in July 2020. The five-day trade show will continue but the two-day public weekend is being discontinued.

The Shoreham airshow crash was the first to cause spectator fatalities in the UK for 63 years.

In May 2017 another pilot crashed his aircraft, this time at the Abingdon airshow in Oxfordshire.

Luckily he landed in a field and nobody was hurt. Last year a report by the AAIB found "the engine seized up following the loss of its oil during the flight". "Several safety actions have been taken by the engine manufacturer, the owner, and the Light Aircraft Association," the report added.

Hundreds of leaked CVR recordings and transcripts are available on the internet. Ghouls can trawl YouTube and find dozens of clips of chilling excerpts of the final moments of pilots involved in deadly air crashes.

One of the most disturbing is that from a 1985 crash in Japan when a Boeing 747 hit Mount Takamagahara, killing all 520 people on board.

An automated voice can be heard warning: "Pull up, pull up!" seconds before the pilot, Captain Masami Takahama, says simply: "It's the end" and then there is the noise of the impact.